A quest for Italian heritage on tour

What began as an unexpected connection and bit of family research ended as two long-awaited journeys in Italy, where heritage came full circle for Go Ahead travelers Sue and John. Here, the pair shares how tracing family roots made their adventures even more inspiring. 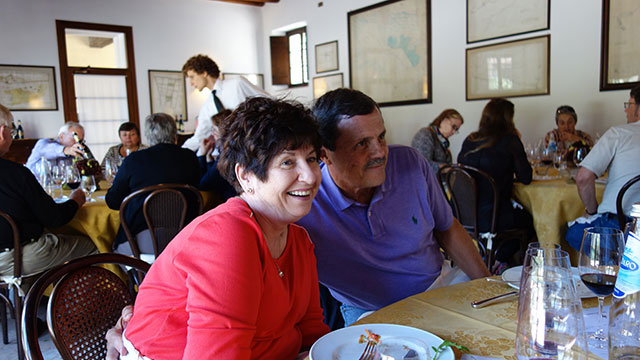 Sue and John on tour in Valpolicella, Italy

For John, his journey uncovering family heritage came out of the blue, when he received an email from a man who shared his late grandfather’s name. “I got a message from Antonio Muffo, who turned out to be a distant cousin in Pescara, Italy,” John explained. “I don’t know how he got my email address, but there’s only a handful of people with our last name, so he knew we must be related.”

As luck would have it, the email came at the perfect time; John and his wife Sue were getting ready to embark on a trip to Rome, and made plans to meet Antonio at the tail-end of their travels. “Antonio’s wife took us around Pescara and introduced us to other family members,” John said. “They were wonderful people and just welcomed us with open arms.”

John’s relatives treated he and Sue like guests of honor—and even learned more about their own family tree in the process. “They didn’t even know they had relatives in the U.S.,” John recalled. “Fortunately, my grandfather’s brother had told me the whole story of our family, so I was able to tell them how we were related!” 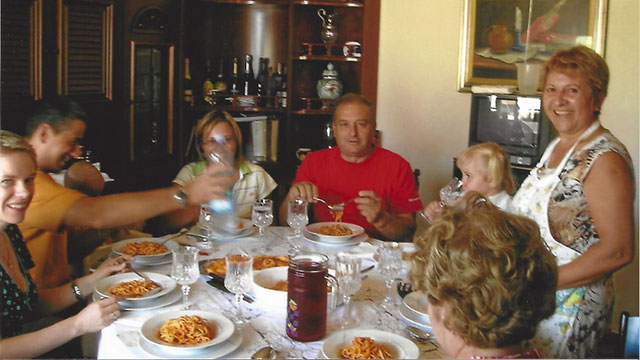 John’s distant cousins hosting a meal in their home in Pescara, Italy

The memorable experience in Pescara left a lasting impression, and made Sue even more eager to uncover her own heritage in northern Italy. It was a journey she’d always wanted to take, and began when she sat down to do some research about her Italian ancestors. “I went online and found a picture of the boat my great-grandmother and grandmother came over to the U.S. in and saw the ship’s handwritten manifest,” Sue said. “When that appeared before my eyes, I couldn’t believe it.”

How much money each immigrant had, how old they were—the document told Sue pieces of her family history she’d never heard, including the actual name of her ancestors’ hometown. “My grandmother always told us she was from Modena, and that was technically true; she was from the province of Modena, but she lived in the town of Fanano,” she said.

Sue finally got her chance to visit her family’s hometown when she and John realized how close they’d be during their Food & Wine: Northern Italy & the Italian Riviera tour. The duo seized the opportunity and emailed Alberto, an Italian student they’d hosted, who offered to drive them up into the Apennines during their free day in Bologna. And just like that, over 100 years after Sue’s grandmother and great-grandmother immigrated to Illinois from Fanano, Sue made her way back. 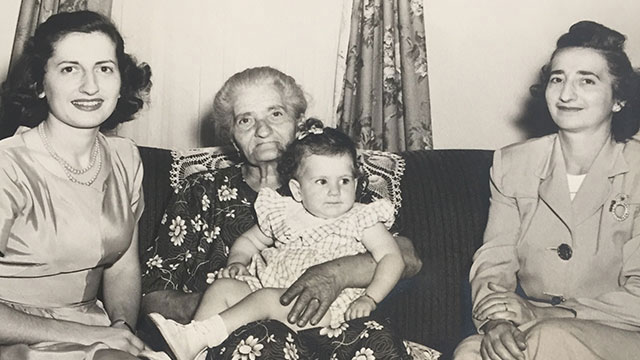 Upon arrival, she and her traveling companions visited the only place that was open in the rural mountain town that Sunday: a small coffee shop. “We asked the cashier if he knew the name ‘Lardi,’ which was my great-grandmother’s maiden name,” Sue said. “The cashier responded, ‘You’re related to half the town!’ There was even a Lardi Tower in the square.”

“Then we went in the church and that was really special because I can imagine my great-grandmother getting married there,” Sue mused. “My grandmother was likely baptized there as well because she was only two when she came to the U.S. It really hit me when we went in—that was amazing.”

Each traveler’s journey is full of personal moments that inspire them. For Sue and John, it was walking in the footsteps of their ancestors. “I only met my great-grandmother when I was really little,” Sue said. “I’ve got a picture of me as a toddler sitting on her lap, and visiting her hometown made me feel closer to her. It was the thrill of a lifetime.” John agreed. “Tracing our heritage made for much more interesting, personal trips,” he said. “It really connected us to the country.”

Where would you like to go to trace your family heritage on tour?