The site of historical happenings and home to famous artists such as Rembrandt, Van Gogh and Vermeer, Amsterdam has such a rich museum scene. Must-sees on any Amsterdam itinerary, here are the city’s three most-visited museums. 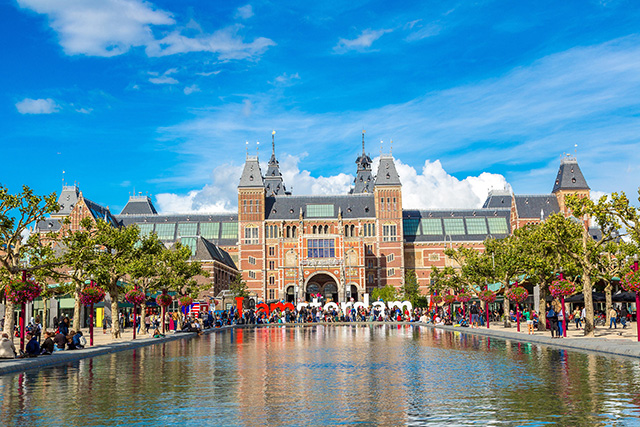 Dedicated to the arts and history of Amsterdam, the collection at the Rijksmuseum is made up of one million Dutch artifacts and pieces of art spanning the years 1200-2000. Of the 8,000 pieces that are currently on display, paintings from the Dutch Golden Age (including the works of Vermeer and Rembrandt) represent 2,000 of them. With an almost ten-year and 375 million-euro renovation recently completed in 2012, the Rijksmuseum continues to be one of Amsterdam’s most impressive.

Did you know? The Rijksmuseum is home to the Rijksmuseum Research Library, the largest public art history research library in the Netherlands.

Van Gogh Museum For all things Vincent van Gogh, there’s no better place than the eponymous Van Gogh Museum. The history of the collection here can be traced back to the painter’s death in 1890. The possession of his unsold works was passed throughout the van Gogh family until 1962 when they were transferred to the state-operated Vincent van Gogh Foundation—11 years later, the museum opened its doors to the public. Today, the museum houses some 200 paintings, 400 drawings and 700 letters by the artist.

Did you know? On top of being the Netherlands’s most-visited museum in 2017, the Van Gogh Museum has welcomed visitors from more than 125 countries.

Step into history with a visit to the house where Anne Frank and her family hid from the Nazis during World War II. Since 1960, this 17th-century canal house turned museum has been welcoming visitors to see the famous Secret Annex firsthand. Over the years, the building has had to be renovated twice to accommodate the growing number of visitors. The most recent of these renovations took place in 1999, and reworked the museum to feature the Frank family’s front offices, which were restored to how they appeared in 1940.

Did you know? The Oscar that Shelley Winters won in 1959 for her portrayal of Petronella van Daan in The Diary of Anne Frank is kept here, donated to the museum by the actress.

Have you ever been to any of these museums on a trip to Amsterdam?