Everything you need to know about Belgian chocolate

Belgium is known for a lot of things—waffles, beer, being home to the de facto capital of the European Union—just to name a few. While these contributions are both delicious and noteworthy, our favorite gift to the world this country has given has got to be its rich, creamy, melt-in-your-mouth chocolate. Read on to find out more about this delectable confection before you taste the original masterpiece on your trip to Belgium. 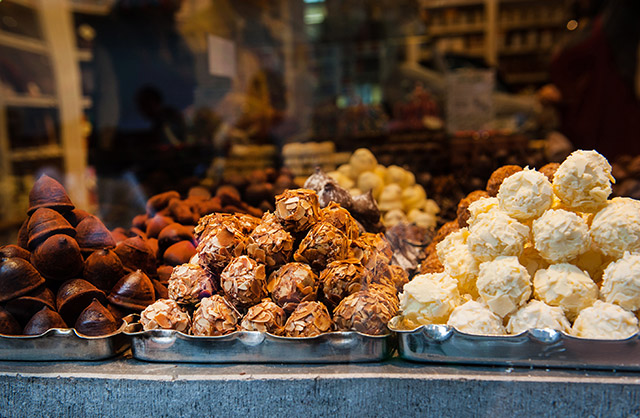 Belgian ties to chocolate stretch back as far as 1635

The country’s famous love of chocolate began when Spanish settlers brought it to the area in the early 17th century. By the mid-1700s, chocolate, especially hot chocolate, had become a favorite treat of the upper classes, and when Belgian King Leopold II colonized the Congo in 1885, the country was able to enjoy an unlimited supply of the territory’s wealth of cacao.

Law has regulated the composition of Belgian chocolate since 1884

It’s thanks to these protections that Belgium has been able to successfully maintain its reputation as one of the world’s premier chocolatiers. In order for a chocolate to truly be considered “Belgian,” its production needs to occur within the country itself, although its ingredients may be foreign-sourced. Other rules include a strict adherence to traditional preparation techniques, using a minimum of 35 percent pure cocoa and prohibiting the use of artificial-, vegetable-, and palm oil-based fats.

Chocolate has an important role in the Belgian financial system

With over 2,000 chocolate shops in the country, both large enterprises and small family-owned boutiques alike, Belgium produces upwards of 200,000 tons of the stuff each year. As a result, the chocolate industry alone contributes roughly two billion euros to the country’s economy annually.

“Praline” takes on a new meaning in Belgium

While the word evokes images of fudgy, nut-filled treats for those of us on this side of the Atlantic, in Belgium, pralines are characterized by a soft filling encased in a chocolate shell—similar to what we call truffles. Invented in 1912 by the grandson of Jean Neuhaus, the founder of the now world-famous chocolatier of the same name, these popular sweets are a national favorite with a prestigious heritage.

No matter what kind of chocolate you’re looking for, there’s a shop that has it

From simple bonbons to decorative chocolate figurines, you can find it all in Belgium. For a taste of history, visit Neuhaus—the chocolatier responsible for creating the praline—to sample one of these classic confections. If you’re looking for something artisan-made with a personable feel, head to Passion Chocolat, a small, two-store business located within the heart of Brussels. Or, make your way to Confiserie De Clerck in Bruges to try the whimsical designs of Jan, a third-generation chocolate maker.