Skip to main content
BlogDestinationsCharleston and Savannah: Sister cities of the South
Destinations

Charleston and Savannah: Sister cities of the South

Whether it’s Charleston’s pastel mansions or Savannah’s Spanish moss-covered oaks, it’s hard not to fall for either city’s Southern charm. At just over 100 miles apart, these sister cities may have a small sibling rivalry, but there’s no reason to pick sides when you can see both Charleston and Savannah. Read on to discover what makes each city unique—and a perfect complement. 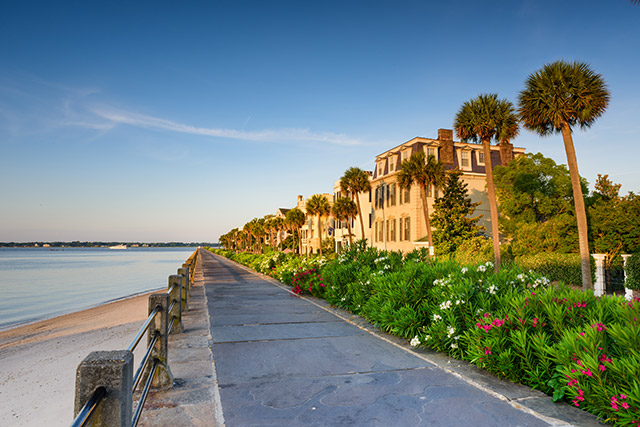 Settled by English colonists in 1670, the seaside city of Charleston grew into a bustling trading port and was the largest city in the South until the end of the Civil War. In 1886, Charleston experienced a major earthquake that nearly leveled the city—but much of its colonial and Antebellum history is still on display, and Charleston boasts more than 1,400 historic buildings on record.

From Rainbow Row to the Old Citadel, Charleston’s history comes alive at every turn. Visit Fort Sumter to see where the Civil War began, stroll through the campus of the College of Charleston, the oldest college in South Carolina, or hop in a horse-drawn carriage for a ride through the beautiful Battery neighborhood.

For shopping, Charleston’s City Market can’t be beat. Its Great Hall and open-air sheds feature an eclectic mix of local vendors, offering everything from gifts to gourmet treats. Pick up a sweetgrass basket, hand-woven by artisans in the traditional Gullah-Geechee style, for a souvenir with historic significance.

Charleston is the headquarters of Lowcountry cuisine, which highlights local fare—think fresh produce, grains and seafood—alongside African, Caribbean and French influences. Try a Lowcountry classic like Frogmore stew, a hearty and spicy seafood boil that combines shellfish, corn and sausage.

With more than 300 years of history, it’s no surprise there are ghost stories (and perhaps a few ghosts) floating around Charleston. Pay a visit to one of the city’s most “haunted” locales, the Olde Exhange Building. It was built as a custom house but once served as a prison, holding a range of inmates from Revolutionary soldiers to the infamous pirate Blackbeard.

Where you’ve seen it

Charleston’s Southern charm makes it a popular movie-making location; its streets and sites can be seen in many films, like The Notebook and Cold Mountain. And, while much of the classic Gone with the Wind was filmed on a sound stage in Los Angeles, Charleston still holds the honor of being Rhett Butler’s hometown. 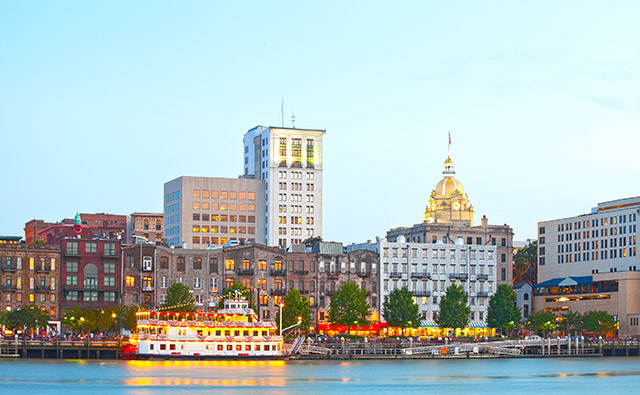 British General James Oglethorpe named America’s 13th colony “Georgia,” after King George II, and founded its first city, Savannah, in 1733. It’s said that William Tecumseh Sherman, the Civil War Union General, was so taken by Savannah’s beauty that he spared the city during his infamous March to the Sea.

A walk through Forsyth Park is a must on any trip to Savannah. Stroll through the park’s 30-acre grounds to view the iconic Forsyth Fountain and Confederate Monument. Savannah also boasts a vibrant art scene, being the home to the Savannah College of Art & Design. The Telfair Museums, the first public art museum in the South, offers three locations around the city. Visit one (or all!) to view their collections, which range from classic to contemporary.

The Olde Pink House is an institution in Savannah’s restaurant scene. This aptly named eatery, housed in a pink Georgian-style mansion, offers traditional Southern cuisine with an elevated spin and live music every night. After dinner, treat yourself to a scoop at the famous Leopold’s Ice Cream or pick up pecan pralines, a Southern favorite, at the Candy Kitchen.

The city’s oldest burial ground, the Colonial Park Cemetery, is also Savannah’s spookiest locale. The cemetery dates back to 1750, and is the resting spot of a Revolutionary War general and signers of the Declaration of Independence, among other notable Savannahians.

Where you’ve seen it

John Berendt’s Pulitzer-nominated Midnight in the Garden of Good and Evil is set around Savannah, and many locations featured in the book are easy to spot around the city. The most famous, the Mercer House, is now a museum dedicated to preserving Savannah’s history.

Have you visited Charleston or Savannah? Have a favorite? Tell us on Facebook!