Skip to main content
BlogDestinationsKraków vs. Warsaw: What to know about Poland’s top cities
Destinations

Kraków vs. Warsaw: What to know about Poland’s top cities

With borders that touch the Czech Republic, Germany, Lithuania, and Russia, Poland is marked by a tumultuous history and rich local culture. Two of its most sought-after cities, Kraków and Warsaw, offer distinct looks into the country’s past, present, and future. Here’s a breakdown of what each has to offer travelers. 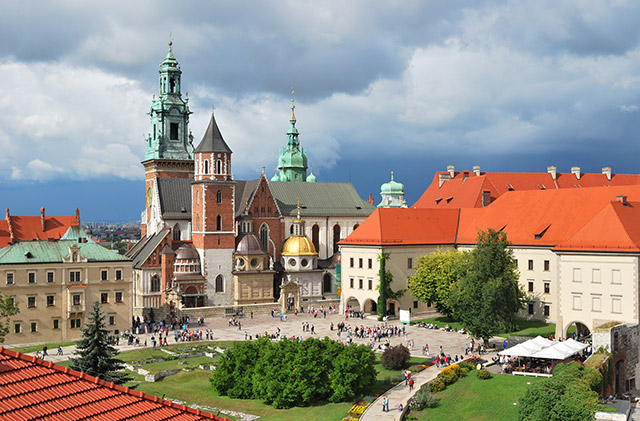 Straddling the Vistula River and at the base of the Carpathian Mountains, Kraków is a former capital city that continues to be a regional cultural capital. You can visit Kraków on our tour, Highlights of Eastern Europe.

Legend holds that Kraków was built atop the cave of a dragon that was slain by mythical King Krak. The city first rose to prominence in the first century thanks to some lucrative trading by the Vistulans, who occupied the area. Since then, the city’s history has been quite tumultuous, with everyone from the Moravians and the Bohemians to the Swedes and the French invading its borders. During the Second World War, German forces used the city as their capital of General Government.

Mostly medieval — With so many intruders throughout history, it’s a wonder that the charming architecture of Kraków has endured. We’re lucky it has, because the city still has a thriving Jewish quarter, beautiful cobblestone streets and well-preserved medieval buildings.

Obwarzanek — A traditional ring of dough that’s boiled, baked and regarded as a point of pride for Kraków bakers—just don’t call it a bagel. You can find these sold for just a few coins on almost every street corner in the city.

Zapiekanka — Loved by locals as a late-night snack (but perfect for a quick and satisfying meal), these open-faced, street-food sandwiches are traditionally topped with mushrooms and melted cheese.

Glowny Square — Europe’s largest market square, it’s packed with local vendors on the weekends. If you’re feeling ambitious, you can buy a ticket to climb up the Town Hall tower for an incredible view across the square and surrounding Kraków. (If stairs aren’t your thing, watch the bugle player emerge from the tower’s top window every hour on the hour.)

See it on screen

Schindler’s List — Kraków is the setting for the 1993 historical drama starring Liam Neeson. Schindler's List is the true story of a German factory owner who saved over a thousand Jewish refugees from the Nazis by employing them. Today, the factory building houses the Museum of Contemporary Art and the Historical Museum of the City of Kraków, which features interactive exhibits that what life was like during the Nazi occupation and a monument to the survivors. 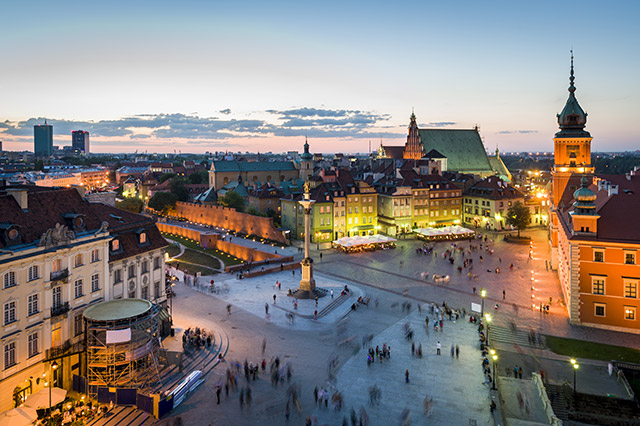 Warsaw is another stop on our tour, Highlights of Eastern Europe. It’s Poland’s modern capital, largest commercial center, and biggest urban area. Its sense of prosperity and promise attracts Poles from all over the country to settle within its borders. While World War II leveled much of the city, Warsaw’s pride ensured that the city was restored to its pre-war appearance.

After the Soviet Union and the Nazis came together to invade Poland in 1939, the Nazis occupied Warsaw for five years. Two major uprisings ensued in 1943 and 1944, with the Nazis destroying more than 85% of the city and almost 1,000 historical structures. Warsaw is also known for having one of the largest Jewish ghettos throughout Europe during the war, with some 400,000 Jews relegated to one square mile of space.

Pre-war and modern — After Warsaw was almost entirely destroyed by the Nazis, the city was rebuilt to its former grandeur, a mix of Gothic, Renaissance, and neoclassical styles. In recent years, Warsaw has seen a surge of modern architecture and skyscrapers, making its downtown and financial hub look very similar to other large metropolitan cities.

Pierogi — These world-famous dumplings come stuffed with everything from meat to fruit. Sauerkraut is an especially popular filling, and you’ll often find it mixed with potatoes. For a spin on the traditional pierogi, try them baked—they’re more like empanadas in this style.

Milk bars — Not a food but a place, milk bars are holdovers from the area’s Communist 1960s and are an opportunity to take an affordable glimpse (and taste) of the city’s past.

Starego Miasta Square — Commonly referred to as Warsaw’s “Old Town,” this large, vibrant square is home to much of the city’s historic architecture and features a number of charming cafes and shops.

Lazienki Park — The city’s largest park and the site of the beautiful Chopin monument.

See it on screen

The Pianist — The WWII memoir of the same title comes to life in the Roman Polanksi-directed film. Adrien Brody stars as Wladyslaw Szpilman, a composer who lived in the Warsaw Ghetto during the uprisings.

Which city would you want to explore on a tour of Poland? Tell us on Facebook!

Know before you goCity guides