Skip to main content
BlogTravel tipsTravel Guide: 5 of the most beautiful fjords in Norway you can visit
Travel tips

Travel Guide: 5 of the most beautiful fjords in Norway you can visit

There’s no doubt that Norway is a fascinating country to visit—it’s the birthplace of skiing as well as home to charming fishing villages, the midnight sun, and the aurora borealis. While the northern European nation has much to offer, it’s Norway’s fjords that really have us longing to visit. Here are some quick facts about fjords, and five of the prettiest you can visit in Norway.

What is a fjord?
Fjords (pronounced fee-Yords) are narrow inlets created by glacial erosion over the course of many ice ages. These geographical features are what give western Norway its dramatic coastline—the most impressive are flanked by sky-high cliffs or sloping mountains and can stretch inland for hundreds of miles.

How many fjords are in Norway?
Norway has the most fjords in the world with more than 1,000.

What’s the longest fjord in Norway?
Sognefjord is the longest and deepest of Norway’s fjords. Keep reading to learn more about this fjord.

These are some of the best fjords in Norway and highlight reel spots to visit in Scandinavia.

“I don't think there are words to describe the beauty of the fjords. To be there was a dream of mine,” said traveler Cindy of our Scandinavia: The Capitals & the Fjords tour. 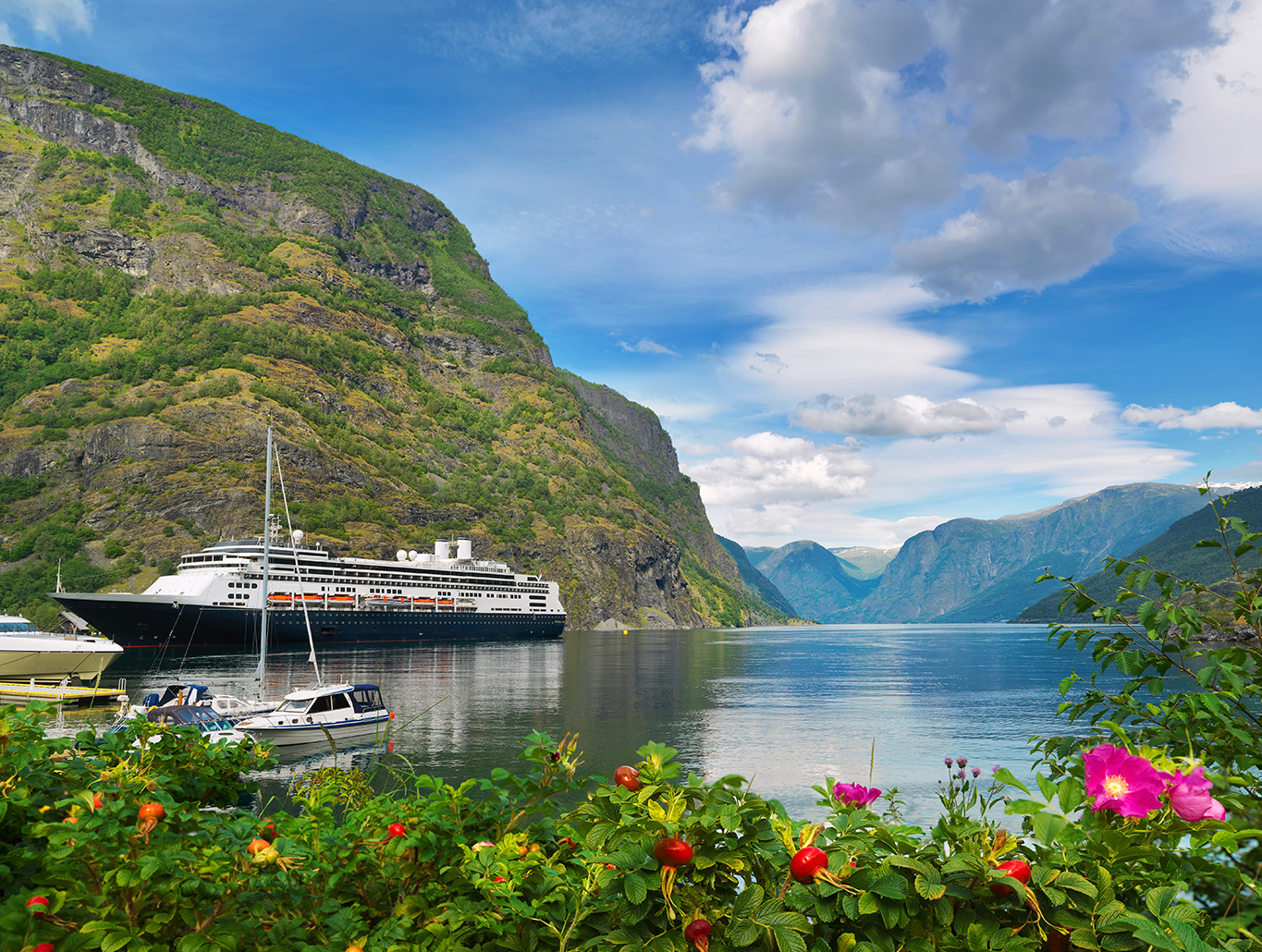 Known as the King of Fjords, Sognefjord lives up to its nickname. Sognefjord is the longest and deepest of Norway’s fjords (and the second-longest fjord in the world). It stretches for 171 miles and plunges up to 4,291 feet below sea level. Sognefjord has at least a dozen branches, including Nærøyfjord, a UNESCO World Heritage site (more on that later). It’s also home to Norway’s tallest free-falling waterfall, Vettissfossen. You simply can’t miss the towering, 902-foot-high waterfall as you make your way through Utladalen valley. You’ll explore Sognefjord and its magnificent branches on our Scandinavia: The Capitals & the Fjords tour. 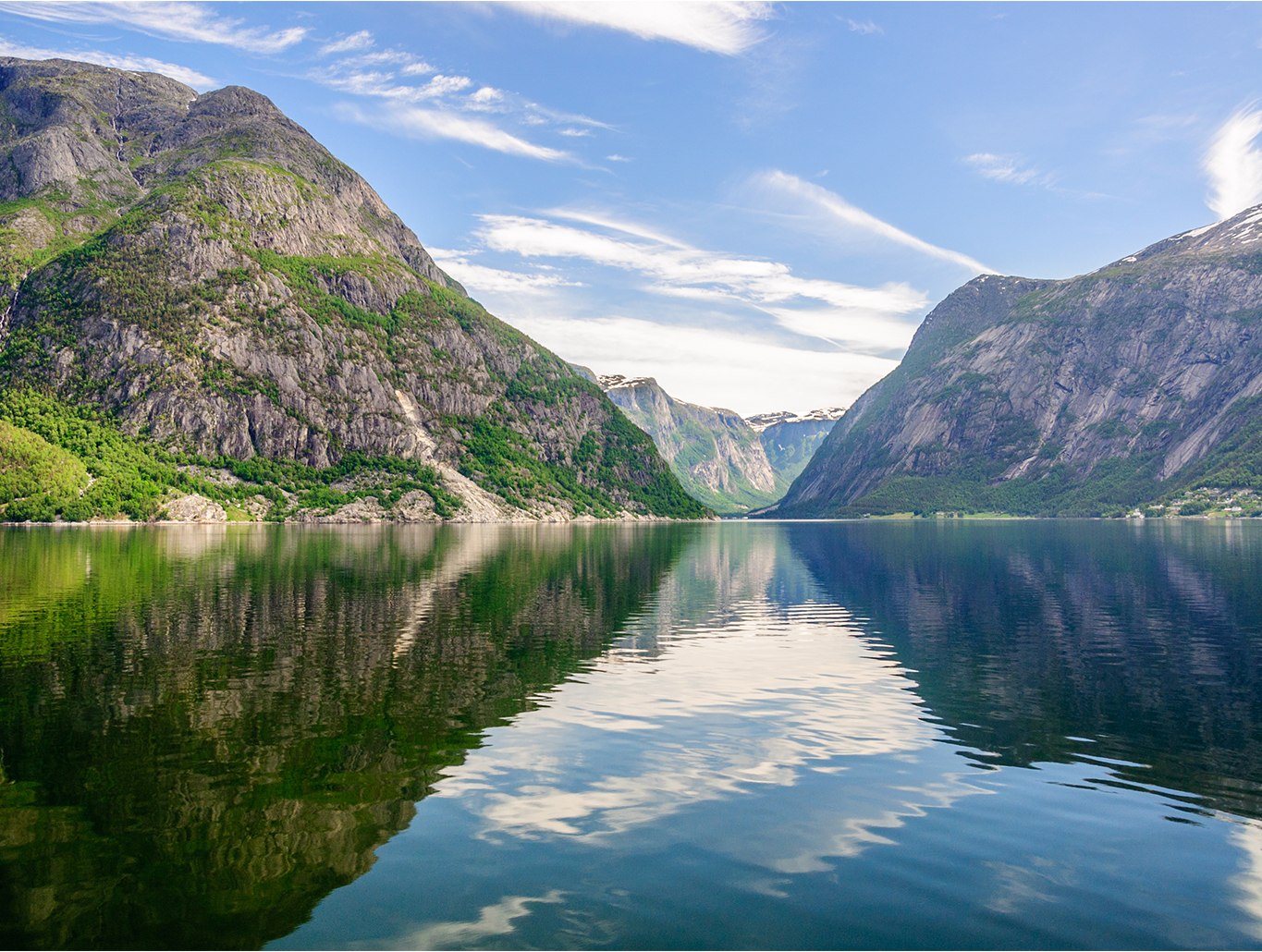 Location: Vestland county in the Hardanger region of western Norway

Fun fact: The land around Hardangerfjord is known as the Orchard of Norway due to its fertile soil.

Hardangerfjord is the second-longest fjord in Norway (third-longest in the world) and home to the most famous waterfall in the country, Vøringsfossen. Every second, 12,000 liters of water spew out of the falls cascading to the canyon below. Step out on a platform that hangs above the fjord for an adrenaline rush and epic sights.

Spring and fall are when Hardangerfjord really sparkles. The spring brings an explosion of white apple blossoms, which by fall turn into crisp and juicy fruit (hence the nickname the Orchard of Norway). Toast your visit with a refreshing glass of the region’s famous cider. 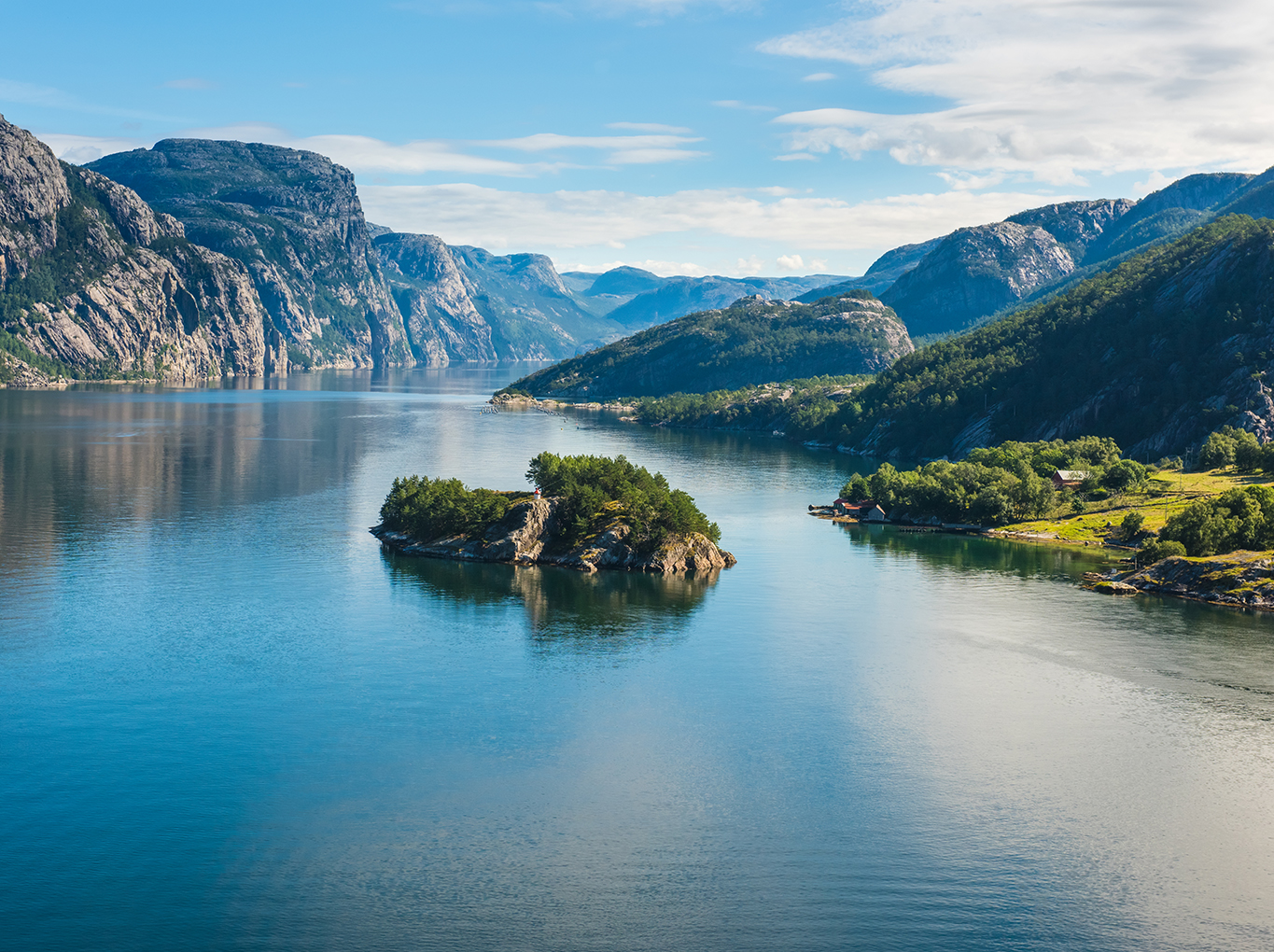 Fun fact: At Mount Kjerag, a mysterious, gunshot-like sound followed by smoke can be heard coming from the rocks. Locals speculate that it’s from water being pushed out of the mountain, but no one knows for sure.

Known as the Light Fjord due to its light-colored granite rocks, Lysefjord is dotted with sheer rock faces and towering peaks. Lysefjord is 26 miles long end-to-end with over 3,000-foot-high rocky walls jutting into the water. Because of its rugged terrain, Lysefjord is sparsely populated—residents travel mainly by ferry as the slopes are too steep for roads.

The fjord features two of the most well-known sights in all of Norway: Pulpit Rock and Mount Kjerag. Pulpit Rock (or Prekestolen) is a steep cliff rising 1,982 feet above Lysefjord. The cliff’s top is nearly flat, making it a spectacular viewing spot. For equally stunning views—and a dash of adrenaline—folks flock to Mount Kjerag for the chance to stand on a boulder wedged above the abyss. The boulder is pinched between two rock faces about 3,228 feet above the water. As if that’s not enough of a hair-raiser, Mount Kjerag is a top spot for BASE jumpers—daredevils who strap parachutes to their backs and leap from buildings, antennas, spans (bridges), and earth (cliffs). 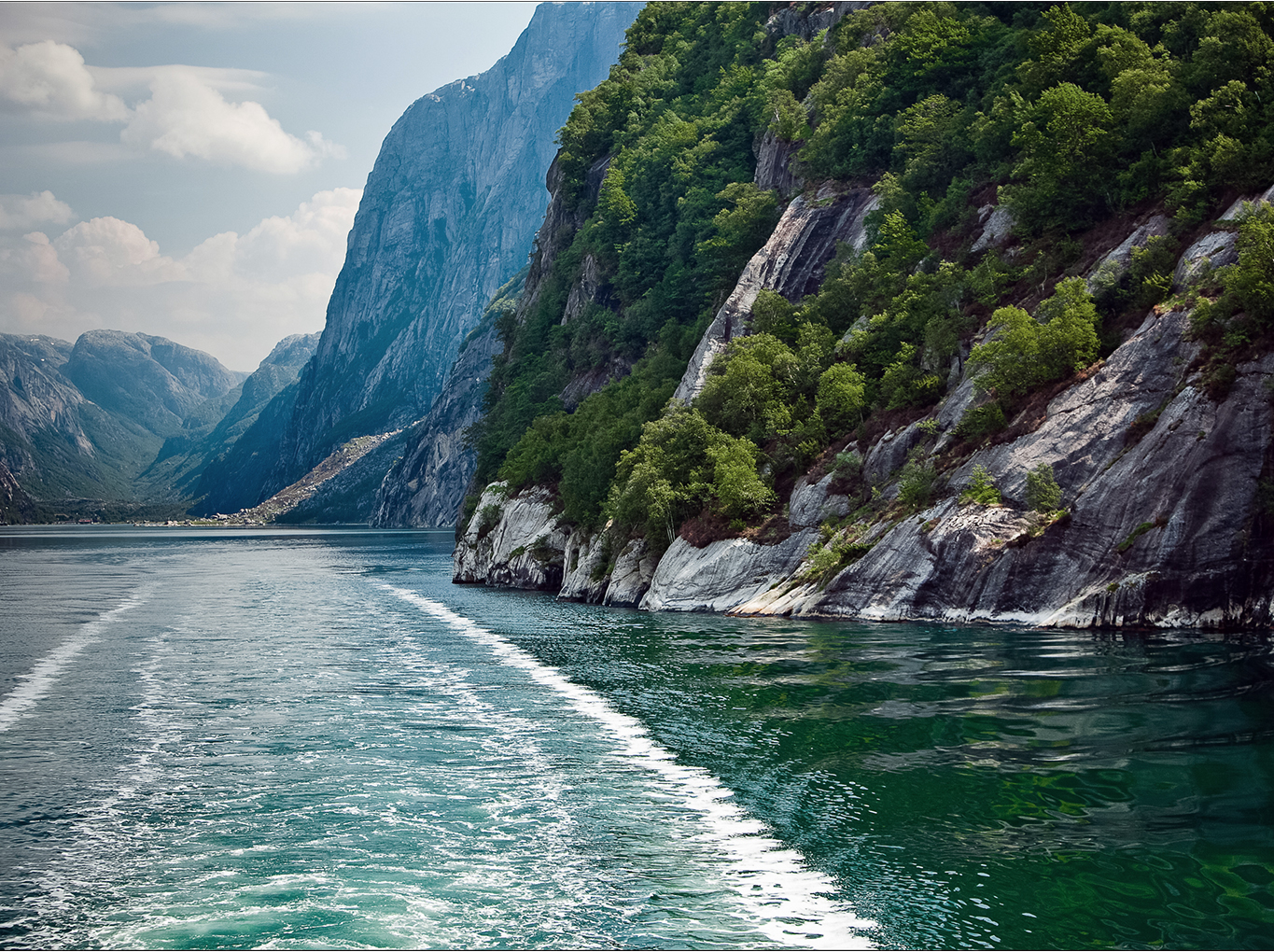 Fun fact: In addition to being a UNESCO World Heritage site, Geirangerfjord is rated as one of the world’s top natural heritage sites by the National Geographic Society.

Almost as wide as 14 football fields, Geirangerfjord boasts snow-dusted mountaintops above lush, green forests. Keep your eyes peeled for abandoned farms tucked away in the hillside as you cruise through. If you’re like us, then you like a good waterfall. The two most famous waterfalls in Geirangerfjord are Seven Sisters Falls and the Suitor. The Seven Sisters is named for its resemblance to long, women’s hair. The falls face one another across the fjord, and the Suitor is said to be trying to woo the sisters. 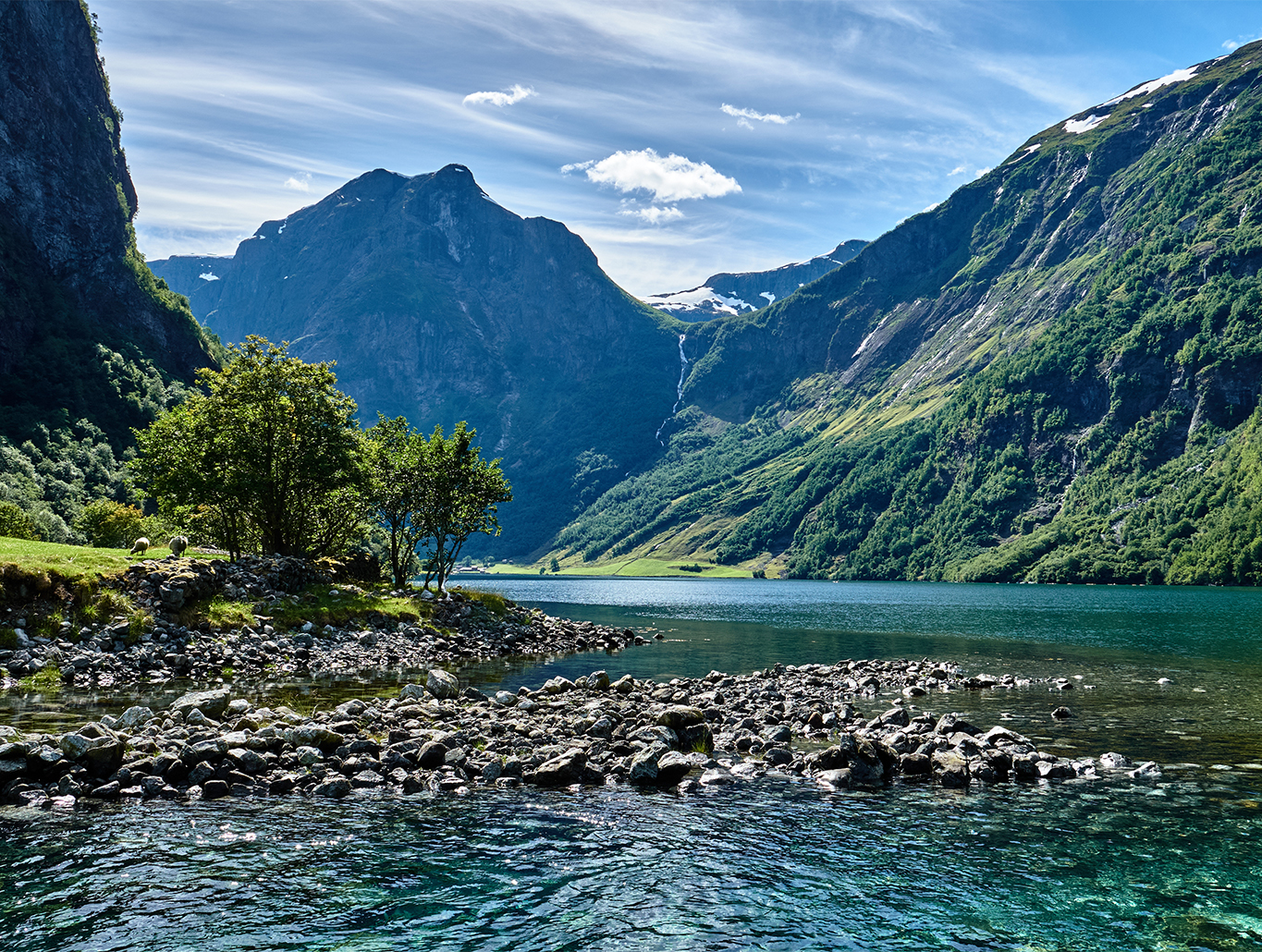 Fun fact: Nærøyfjord is so beautiful that animators for the movie Frozen used it as a source of inspiration.

Nærøyfjord, a UNESCO World Heritage site, is a branch of Sognefjord and one of the fjords you’ll cruise through on our Highlights of Scandinavia: Sweden, Norway & Denmark tour. The fjord’s exceptional beauty is due to its narrowness and its steep-sided, crystalline rock walls. Nærøyfjord is known for being one of the narrowest fjords in Norway, and is just 820 feet wide at its narrowest point. The fjord’s still waters are perfect for a leisurely kayak ride. As you make your way through, keep an eye out for goats grazing on the mountains and seals barking on the rocks.

Scandinavia: The Capitals & the Fjords
14 days | 17 days with Iceland extension