Three-time Olympic medalist DeeDee Trotter is one accomplished traveler. Her competitive track and field has taken her all around the world, and now she’s sharing her story at EF Education First offices and schools in Barcelona, Beijing, Bali, and beyond. At Go Ahead, we love sharing stories from our travelers and globetrotting staffers about their transformative moments abroad, so I was excited to sit down with the inspiring EF Olympics Ambassador to hear more about her travel experiences.

DeeDee learned early on about how life-changing being in a different location could be. After moving from Arizona to Georgia when she was ten years old, she was introduced to a brand-new culture. “There was a focus on youth sports in Atlanta,” she recalled. “My whole world changed. Every kid was playing sports.” She played basketball and ran track throughout school, and followed her passion for athletics to the University of Tennessee.

During her sophomore year in 2003, DeeDee qualified for the World Championships in the 400 meter event—which would take place in Paris. “I had to get a passport for my first international trip,” she said. This experience competing as part of Team USA overseas showed her all travel has to offer. In about two weeks, DeeDee had plenty of time to see the Mona Lisa in the Louvre, visit the Eiffel Tower, and get a feel for French culture. “It was a remarkable trip,” she reflected. “My first experience there was so impactful because it opened my eyes to a world that I didn’t know.” 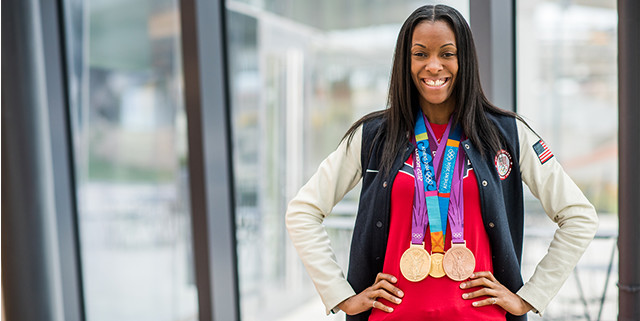 As DeeDee’s professional track and field career took off, more exciting trips came with the territory. Along with competing in many other international events, she was part of Team USA at the 2004, 2008, and 2012 Summer Olympics in Athens, Beijing, and London. Though each trip was centered around the competition and bringing home the gold, she would take every possible opportunity to explore the destination and get to know the local culture.

One particular place that left a mark on her was the small Greek island of Crete, where training camp took place before the games in Athens. “I remember walking outside at night and it was so dark. I could hear the ocean and it sounded miles away. I looked up and my mind was blown,” she continued. “I didn’t know there were that many stars visible from planet Earth. My jaw dropped and I had to catch my breath—I just couldn’t believe it!” This breathtaking silence and beauty is a memory DeeDee will never forget. 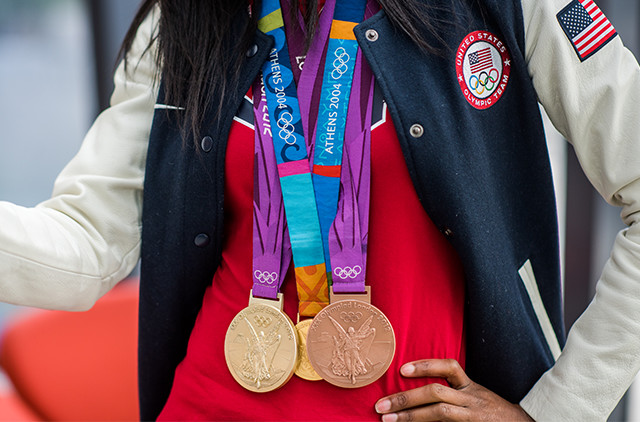 At each Olympic Village, the host country’s culture came to life in details throughout the lodging, landscapes, and of course—the cuisine. “Food is at the center of the village, and the dining hall is the place where the athletes come together,” DeeDee remarked. “With foods from all around the world, it’s one of the fun places to engage with other cultures at the Olympics.”

Another destination where the culinary traditions played an interesting part in her trip? Osaka, Japan. “Japan gave me my most interactive food experience—it was when I really crossed all barriers with trying different things like uncooked fish,” she shared.

DeeDee came out of her Japanese journey with more than just an adventurous approach to eating. The attention to detail during meals paired with the welcoming nature of the Japanese people encouraged her to incorporate certain customs once she was back home. “The way I live my life day-to-day is based on experiences I’ve adopted from other cultures and ways of life,” she explained, “When my friends come over now, we may use chopsticks, eat family style, and sit around the table together so we can have a similar experience.”

“The way I live my life day-to-day is based on experiences I’ve adopted from other cultures and ways of life.”

As the EF Olympics Ambassador, DeeDee is now spreading her inspiring story around the world. With each trip, her passion for travel continues to grow. Since she was injured during the 2008 Olympics, a return trip to Beijing was a highlight of her recent travels. After missing out on the Great Wall initially, she was able to walk—actually, she sprinted!—along it. “The Great Wall experience was so amazing,” she recalled. “I felt like I had drifted back in time!”

She headed south to Brazil this summer too, where our parent company, EF Education First, was the Official Language Training Services Supplier to Rio 2016. The vibrant spirit of the games was palpable, and “it was one of the most beautiful places I’ve ever been to,” she raved. Seeing the massive Christ the Redeemer statue was particularly awe-inspiring. “It’s just an amazing piece of history and art. A picture can’t ever do it justice—and every view beyond it was magnificent,” DeeDee reminisced. “Every time I see so much natural beauty, it strikes that chord, and it takes me right back to Crete.”

“Culture changes me,” reflected DeeDee, who finds something interesting to bring back with her after every single trip. “In Amsterdam, I noticed that people took time to relax together in the park after work. So I learned to embrace the simplicity of sitting and enjoying that time, too.” With every new experience, travel has the power to transform us.

DeeDee is looking forward to exploring new destinations in the United States, South America, and Asia as the EF Olympics Ambassador in the year ahead. Her travels as a professional athlete have introduced her to much of the world, but it’s cultural curiosity that keeps this globetrotter going.

Thanks to DeeDee for sharing her experiences from around the world! Do you have a travel story to tell? Post in the comments below, or send us an email at social@goaheadtours.com.