Skip to main content
BlogTravel tipsWhat to expect on a trip to the U.K.
Travel tips

What to expect on a trip to the U.K.

Even though we may have things in common with our neighbors across the pond—like the English language, for one—there are aspects of daily life in the U.K. that stand apart from our day-to-day at home. Read on to learn more about some of the differences you can expect to find on a trip to the United Kingdom. 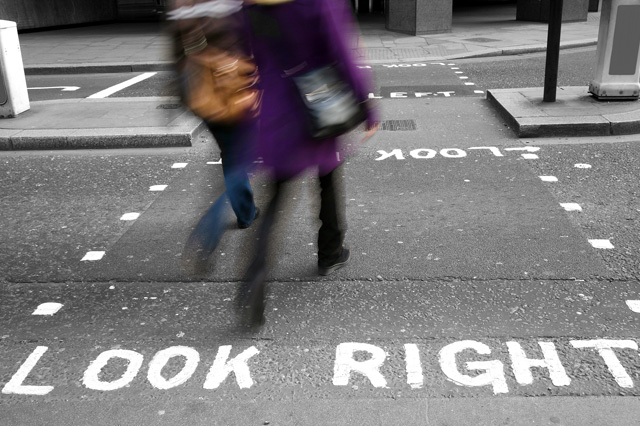 Along with roughly 35% of the world, Brits drive on the other side of the road. Here are some tips and tricks to help you successfully stay in one piece while you cross it. Once you’ve mastered these basics, try out your crosswalk prowess in front of Abbey Road Studios for the ultimate souvenir photo.

Since traffic usually approaches from the opposite direction than what American and Canadian drivers are used to, it’s very important to remember to first look to the right for oncoming motorists.

When in doubt, look down

Just in case you’ve forgotten which way to look first, most marked pedestrian crossings—known here as “zebra crossings“—will actually tell you the direction to check before venturing out across the street. In large cities and smaller towns alike, the reminders “look right” or “look left” will usually be painted right onto the road.

Wait for the green man

Much like when the walk signal lights up at our crosswalks, an illuminated “green man” at a British pedestrian crossing means that it is safe to proceed, while a “red man” means that it isn’t. A word to the wise: if you see a flashing green man and are debating whether or not to begin crossing, don’t.

While the restaurant experience in the U.K. is essentially identical to what we’re used to on this side of the Atlantic, there are a few subtle differences to keep in mind while you’re out to dinner.

At sit-down restaurants, it’s common practice to leave a 10-15% tip for your server. However, this is usually automatically added to your check, so make sure to look at your bill to avoid double tipping. If you’d like to know whether or not the gratuity will be added before it comes time to pay for your meal, you can always ask the staff if service is included.

In pubs, tipping is not a general practice and bar staff do not expect it. Although, if the service you experience up at the bar is exceptional, feel free to leave a tip or offer to buy a drink for the bartender who helped you—they’ll know to add that as a tip!

Ordering a meal at the pub

In addition to the traditional range of beers, ales, and ciders, pubs will typically serve hot, home-cooked meals. Once you’ve chosen a table and have had a chance to peruse the menu, head up to the bar to place your order. Your table will either have a number to leave with the bartender or you’ll be given an identifying ticket or marker (such as a numbered wooden spoon, for instance) so the bar staff will know where to bring your food.

Here in the States, when we want a glass of water while we’re out to eat all we need to tell the server is, “I’ll have water, please.” In the U.K., this same statement will produce different results. Here, bottled water is what is typically served to restaurant guests, and the general response to your request will be “Would you like sparkling, or still?” It’s important to note that if you do choose bottled water, it will cost you; so if all you want to drink is a glass of tap water, make sure to specify that this is what you’d like.

They say that the U.S. and the U.K. are two nations separated by a common language. Whoever “they” are, they’re right. While we both do technically speak English, there are some words and phrases that still tend to get lost in translation. Here are a few that are commonly used.

Chemist – A drug store or pharmacy I’ve got to pop over to the chemist this afternoon for some medicine.

He always looked forward to eating all the sweets from his Easter basket each year.

Don’t forget to bring your jumper; it’s a bit chilly out.

Jelly – Jell-O (Unless you’ve got very unique taste, when asking for something to spread on your toast be sure to say “jam” instead.)

She’s made a cherry jelly for the children’s party.

The hotel’s lobby is located on the ground floor.

Unfortunately, you’ll have to take the stairs. The lift* *is broken at the moment.

One of the best ways of traveling throughout London is to take the underground. Remember to mind the gap!

Even though it may be surprising to find that some of the little things we take for granted at home aren’t as commonplace abroad, experiencing a different way of life is all part of the adventure when you’re traveling.

Ice cubes are not widely used

Don’t be surprised if your soda or water (tap, still or sparkling) arrives at your table with no ice. While we often load up our cups with them, ice cubes aren’t a popular British request. However, most pubs and restaurants will have some on hand, so if you’d like to cool down your drink, all you need to do is ask!

Since summer temperatures are notoriously mild in the U.K., air conditioning isn’t as prevalent here as it is at home. While larger shopping centers and public buildings will have some sort of air circulation system, it is not uncommon for hotels and pubs to lack the powerful air conditioning American visitors are used to. Feeling hot in your hotel? Do as the Brits do and throw open a window.

Are you interested in taking a trip to the U.K.?