19 of the most beautiful castles in the world

Feel like royalty at these famous castles on tour

There’s nothing more magical than looking up at a magnificent castle in a foreign land—except, perhaps, venturing inside. Walking through the grand doors of famous castles around the world is like being transported into a universe only seen in history books or movies. As you walk the corridors of royals past on our castle tours, you might just feel like royalty, yourself.

You’ll get to know their vast chambers and grounds and learn all about the history, cultures, and events that shaped our society into what it is today. So, what are you waiting for? Explore some of the best castles to visit on your next trip. 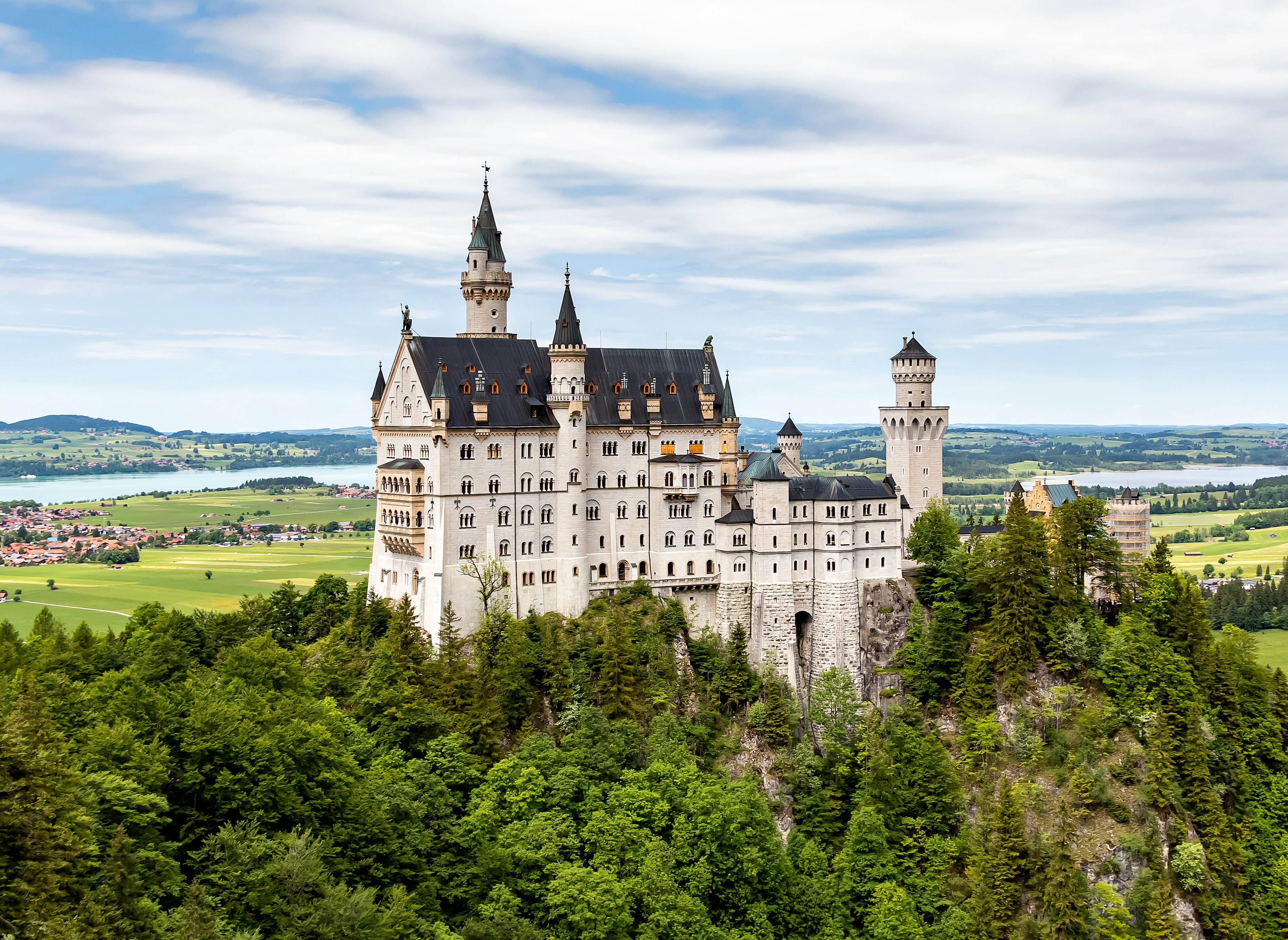 This fairytale-like, 19th century palace sits on a lush, rugged hill above the village of Hohenschwangau in Bavaria, Germany. It was commissioned by the “Mad” King Ludwig II of Bavaria as a retreat. It was heavily inspired by the operas of Richard Wagner. Every wall is hand painted, and every room full of unbelievably intricate craft. The throne room has over a million hand-chiseled tiles alone—putting it at the top of our list of castles to visit on tour in Germany.

Visit Neuschwanstein Castle on A Week in Switzerland, Germany & Austria.

Nestled among vibrant green trees on a hillside in Heidelberg, this multi-level, 13th century palace belonged to the Bishop of Worms (yes, really.) In 1537, lightning struck the higher castle and it burned down, leaving the lower castle ruins you can still visit today. The Heidelberg Castle is one of the most famous castles in Europe partially due to its extravagant gardens, scenic stairs, and fascinating ruins. But it’s also home to two other popular attractions. The first is the Pharmacy Museum, which has over 20,000 exhibits on 2,000 years of medical science. The other is the Heidelberg Tun, the world’s biggest wine barrel, which holds 220,000 liters of wine!

See the Heidelberg Castle on our Grand Tour of Germany.

This castle dates back to 1350, and later became the summer residence of the Electors Palatine Charles III Philip and Charles IV Theodore. It’s one of the best castles to visit, thanks to the UNESCO-recognized gardens here. Spanning 178 acres, the spacious and ornate gardens welcome hundreds of thousands of visitors each year, and feature a unique combination of French and English landscaping styles.

See the Schwetzingen Castle on our tour of Germany, Switzerland & Austria. 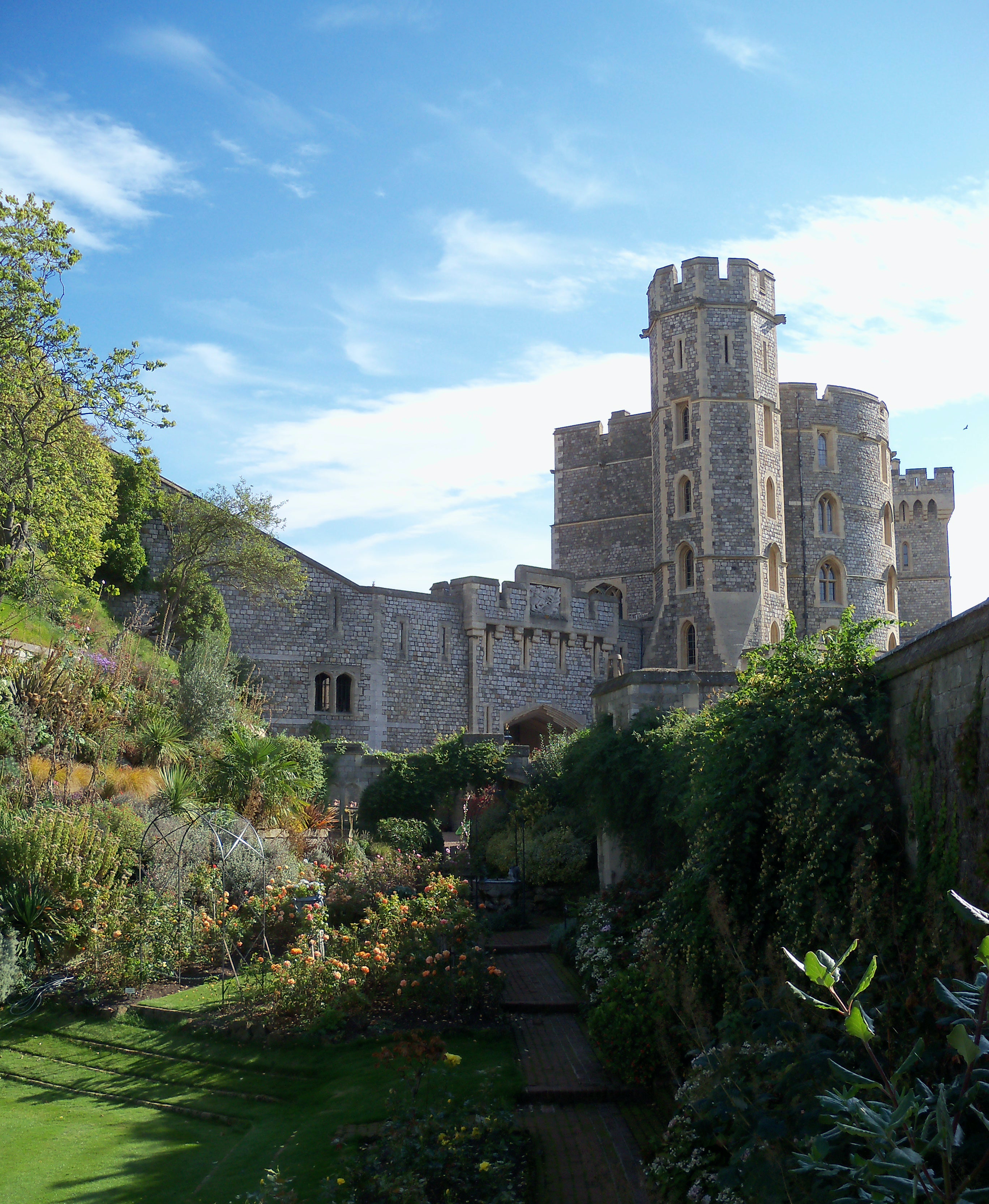 Founded by William the Conqueror in the 11th century, Windsor Castle is the oldest castle in the world that’s still inhabited. So it’s no secret that it’s one of the most famous castles in Europe. It’s been used as a special retreat for the British Royal Family for over 900 years. Today, it’s filled with priceless treasures, including the world’s largest dolls’ house, built for Queen Mary in the 1920s, and a royal mausoleum where monarchs including King Henry VIII have been laid to rest. It’s even where Prince Harry and Meghan Markle got married! Read more about what you’ll see on an excursion to the royal castle.

For most of the year, this palace is a private residence for the British Royal Family and home to London’s largest private garden. But at the end of each summer, Buckingham Palace opens its doors to the public. It’s a yearly reminder that this palace holds a special place in the hearts of both the monarchy and the citizenry—and a favorite site on nearly all our London tours.

Peruse Buckingham Palace on our tour of London & Paris. 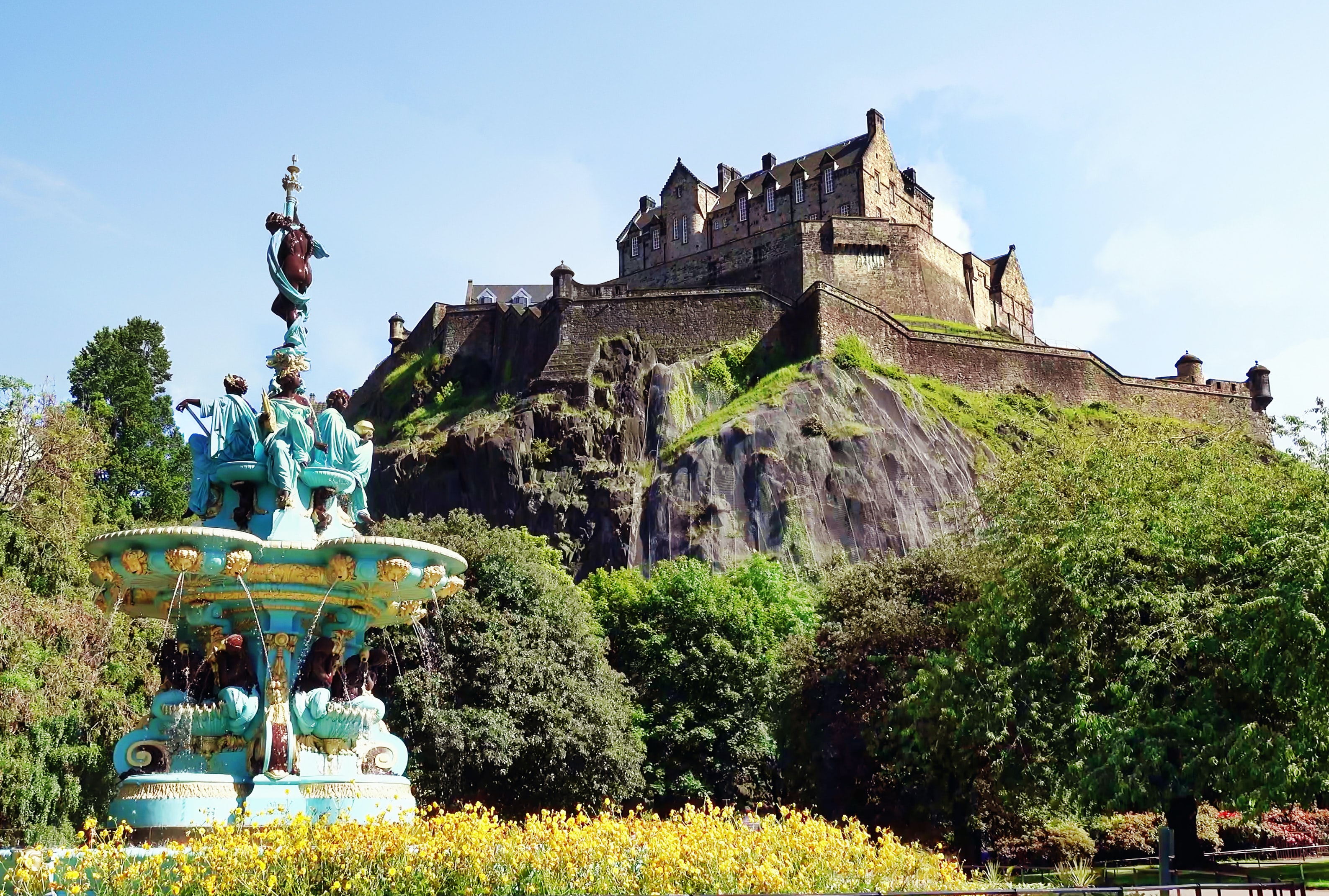 Standing tall on Castle Rock, this fortress dominates the skyline of Scotland’s capital city. Inside, you can explore its grand halls, hidden staircases and moving monuments, and even view the Scottish crown jewels and Stone of Scone. Learn more about a day on tour in Edinburgh from a traveler’s perspective.

Explore Edinburgh Castle on our Highlights of Scotland & England tour.

Inveraray is one of the best castles to visit with its light grey-green stone, majestic towers, and gardens that look like they came straight out of a fairytale. It’s only open between April and October, so be sure to plan your trip to Scotland accordingly!

Admire Inveraray Castle on our tour of Edinburgh & the Castles of Scotland. 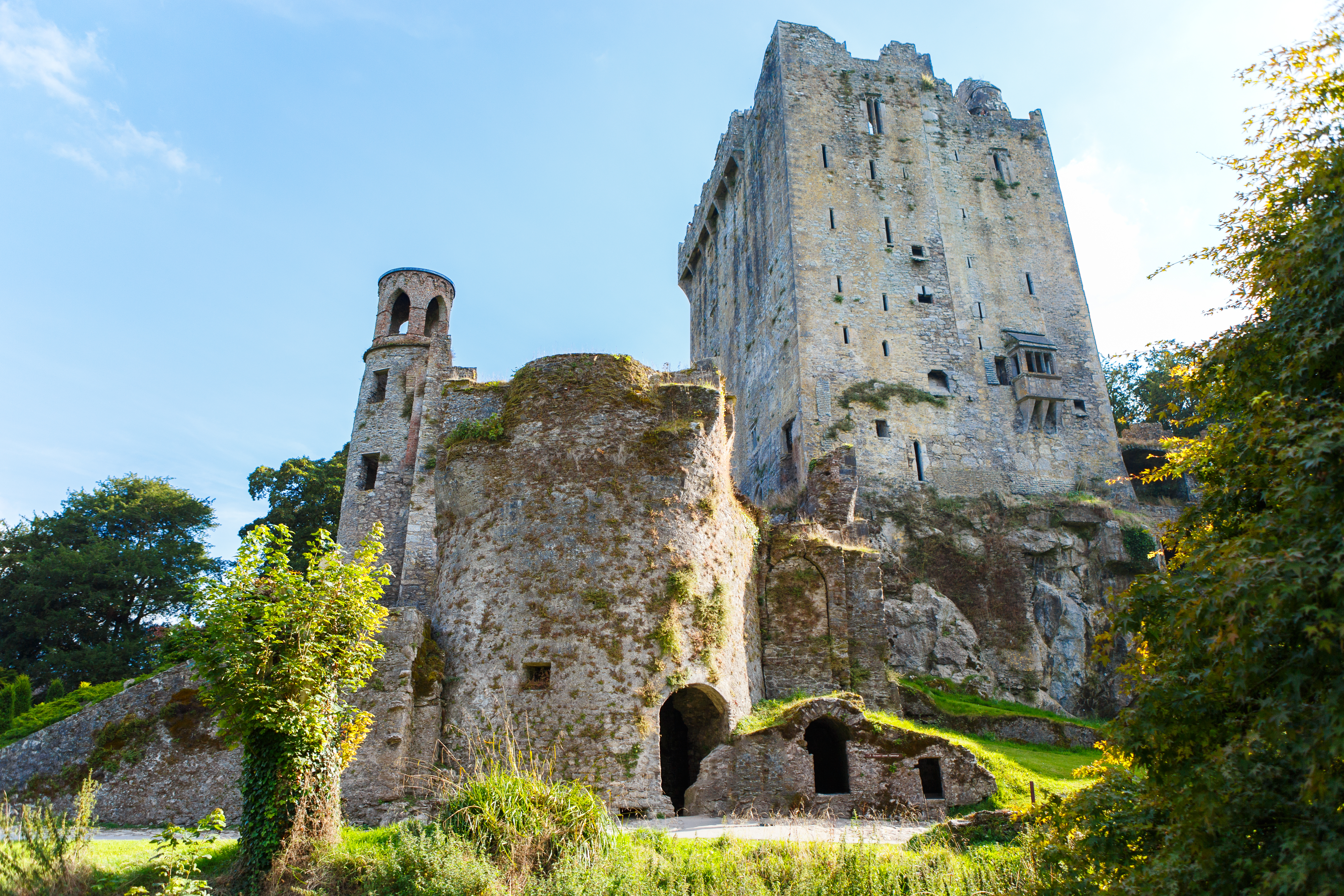 Along the green Irish countryside, you’ll find one of the most famous castles of the world: Blarney Castle. Here, you can climb to the top and kiss the famed Blarney Stone, which is said to grant the “gift of gab.” You can also explore the castle's dungeon, court, and battlements. Discover the best time to visit Ireland.

Get your gift of gab on our Traditions of the Emerald Isle tour.

This castle was built in the 12th century to control a fording-point of the River Nore and the junction of several route ways. It’s one of the oldest castles in Ireland, and the signature symbol of Kilkenny, Ireland’s best-preserved medieval town. There's something new to learn around every corner, from how the toys looked back then, to what kinds of fine porcelain they used, to why the vast ceilings have skylights and how the castle has changed ownership over the years.

See this historical site on our Grand Tour of Ireland. 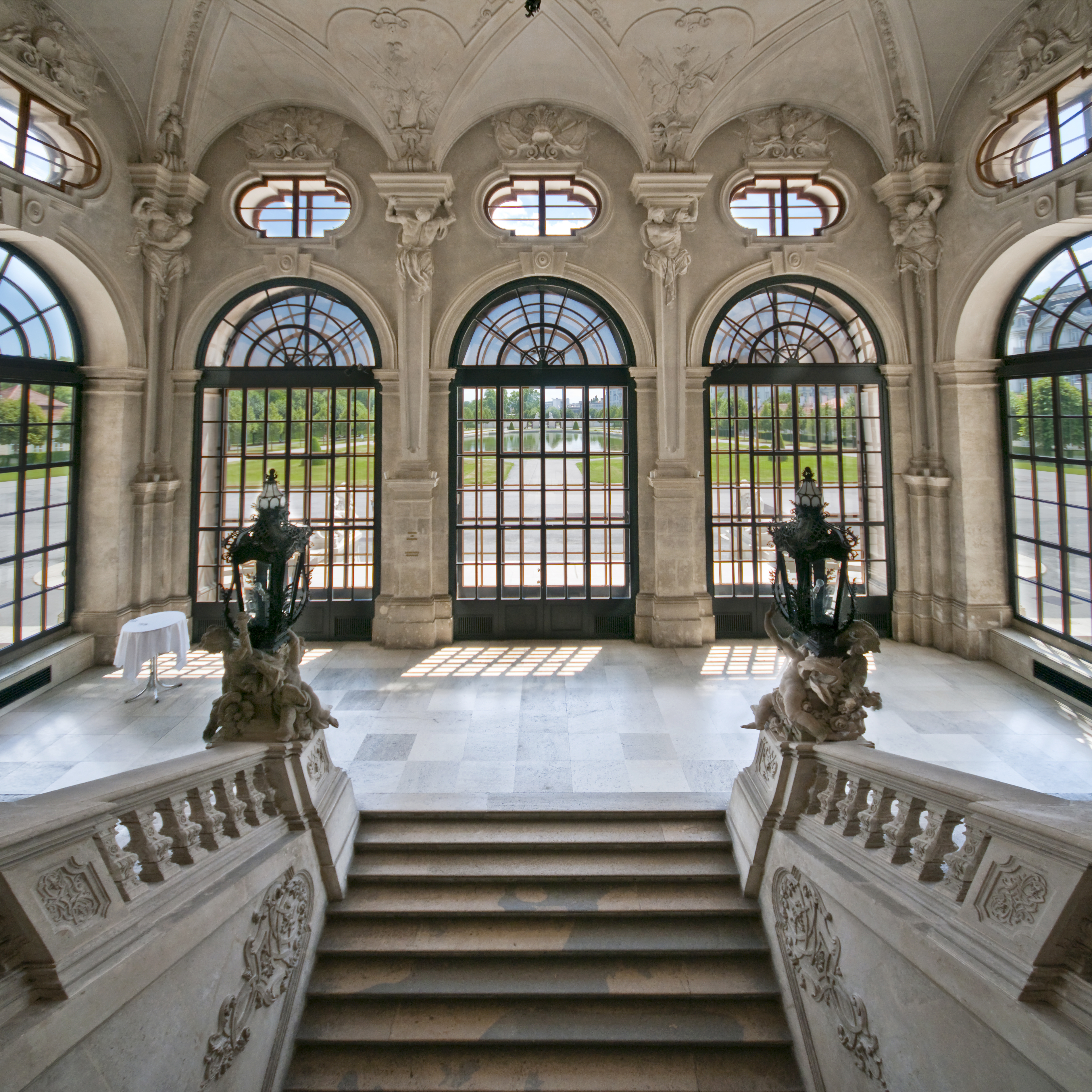 Located right in the heart of Vienna, Belvedere Palace is home to the world’s largest collection of paintings by artist Gustav Klimt—and so much more. You could spend ages exploring the massive grounds, consisting of two Baroque palaces (the Upper and Lower Belvedere), the Orangery, the stables, and impressive gardens.

Take in the Belvedere Palace's beauty on our Highlights of Eastern Europe tour.

In 1548, the Hapsburgs purchased a modest mansion on a plain near the Wien River, which the Hapsburg kings used as a hunting lodge. But two of Hapsburg's royalty, Empress Eleonora Gonzaga and Empress Maria Theresa, saw its potential. During her 40 years on the throne, Maria Theresa treated Schönbrunn as a labor of love, expanding the palace and its gardens, and importing accent pieces from as far away as China. The grandeur and the gardens make this a must-visit place on any of our tours of Vienna.

Visit this palace during your free time on tour in Vienna. 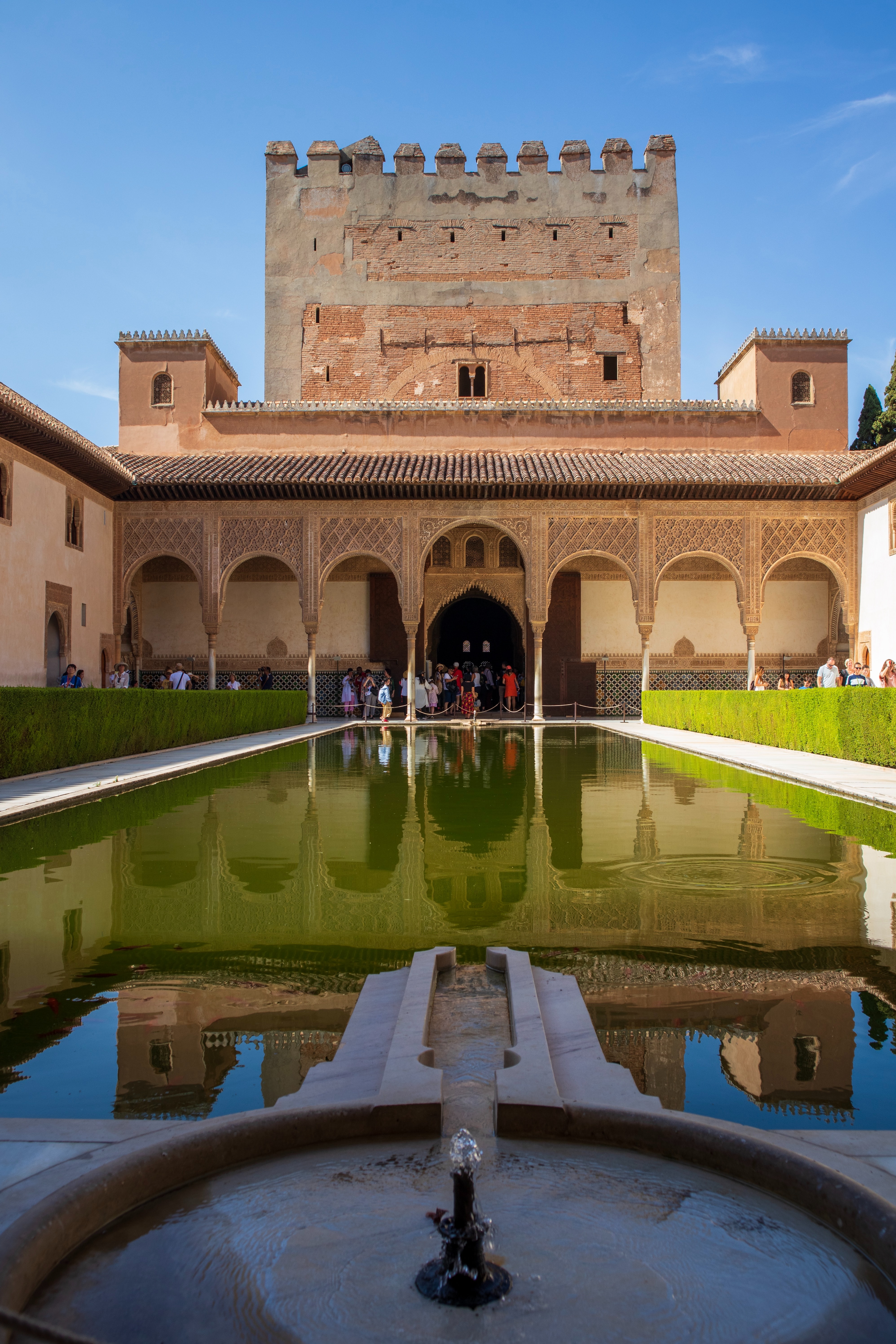 Perched on the Sierra Nevada foothills overlooking Granada, the Alhambra stands in testament to a bygone era. When it was first built, Arab poets said the Alhambra was the jewel in Granada’s crown, and that its shining walls set against the forested hillside were “a pearl among emeralds.” However, it was left to decay from 1492 until 1832, when Washington Irving wrote a book about it. Since then, the Alhambra and its gardens have been restored to their former glory—making a tour of Alhambra a can’t-miss destination. You could spend days exploring the shady courtyards, tranquil reflecting pools, and intricate arabesques while on tour in Spain.

Appreciate Alhambra on our Grand Tour of Portugal & Spain.

This palace was once home to King Ferdinand and Queen Isabella, and has since been a filming location for Game of Thrones. It’s actually the oldest castle in Europe that’s still in use. From its gorgeous Gothic, Renaissance, and Romanesque designs, to its grandiose courtyard, a visit through the UNESCO-protected Royal Alcázar is a must on any of our trips to Seville.

Relish in the beauty of this royal palace on our Barcelona, Madrid & Seville tour. 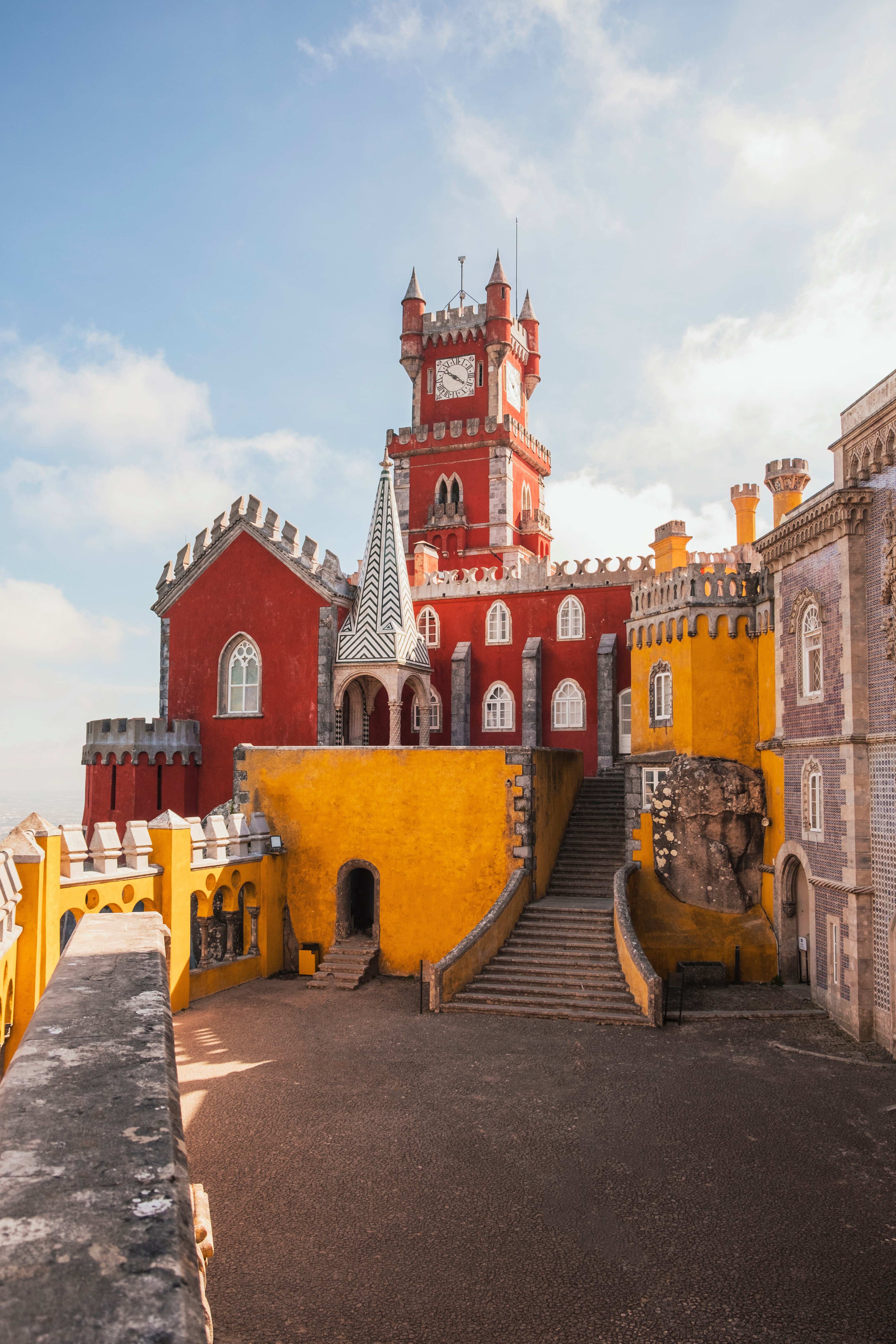 The Pena Palace is a national monument, UNESCO World Heritage Site, and one of the Seven Wonders of Portugal. This colorful Romanticist castle sits atop a hill in the Sintra Mountains, and officials still drop in for government events. As you approach the red and yellow palace walls, you'll feel like you're entering another world—and you’ll catch some of the best views of Sintra, too. Every room inside is an experience of its own. Don't miss the ornate, sculpted walls and detailed furnishings.

See this palace as an excursion to Sintra on our Porto, the Algarve & Lisbon tour. 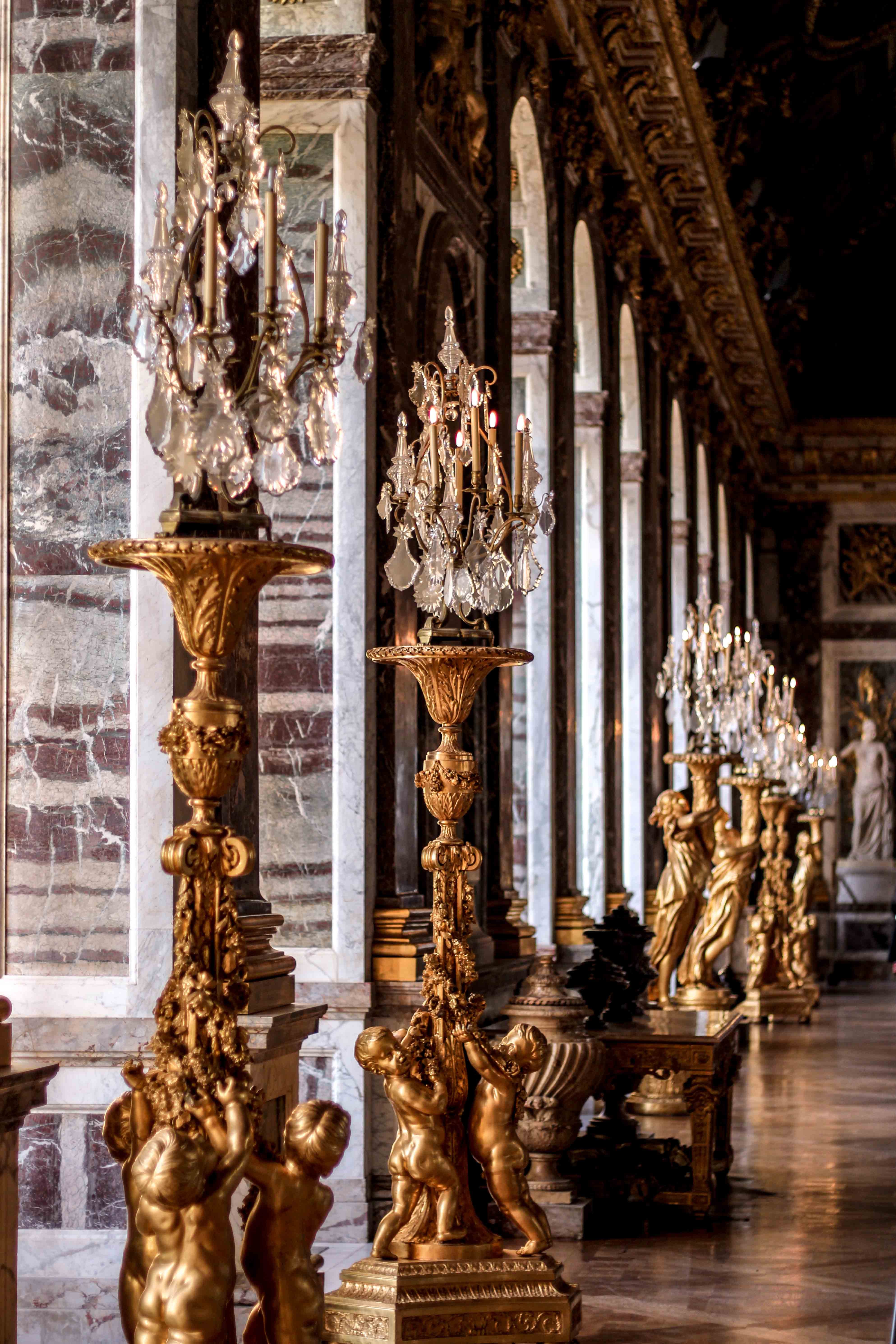 There's a reason Versailles is one of the most beautiful castles in the world: it’s the epitome of 18th-century royal excess. Extravagances like the crystal and gold of the Hall of Mirrors, the dozens of courtiers who were required to watch Louis XIV wake up each day, and Marie Antoinette’s model country village kept them far removed from the realities of French peasant life. So it’s no secret that this famous castle played a major part in the French Revolution. Today, you can walk through Louis and Marie’s lovingly restored gardens and apartments to gain a glimpse into the pomp and circumstance of the French aristocracy.

See Versailles and its gardens on the Grand Tour of France.

Another site of pure extravagance and beauty, Château de Chenonceau was a gift to King Henry II's mistress, Diane de Poitiers. (She was later thrown out by the jealous Queen Catherine de Medici upon Henry’s death). Today, the castle is aptly nicknamed “Château de Femmes," or the Castle of Women. The only original furnishings left in this castle are the tapestries, but that doesn’t mean it isn’t worth a visit.

Check out Château de Chenonceau on our tour of Paris, Normandy, Brittany Coast & the Loire Valley. 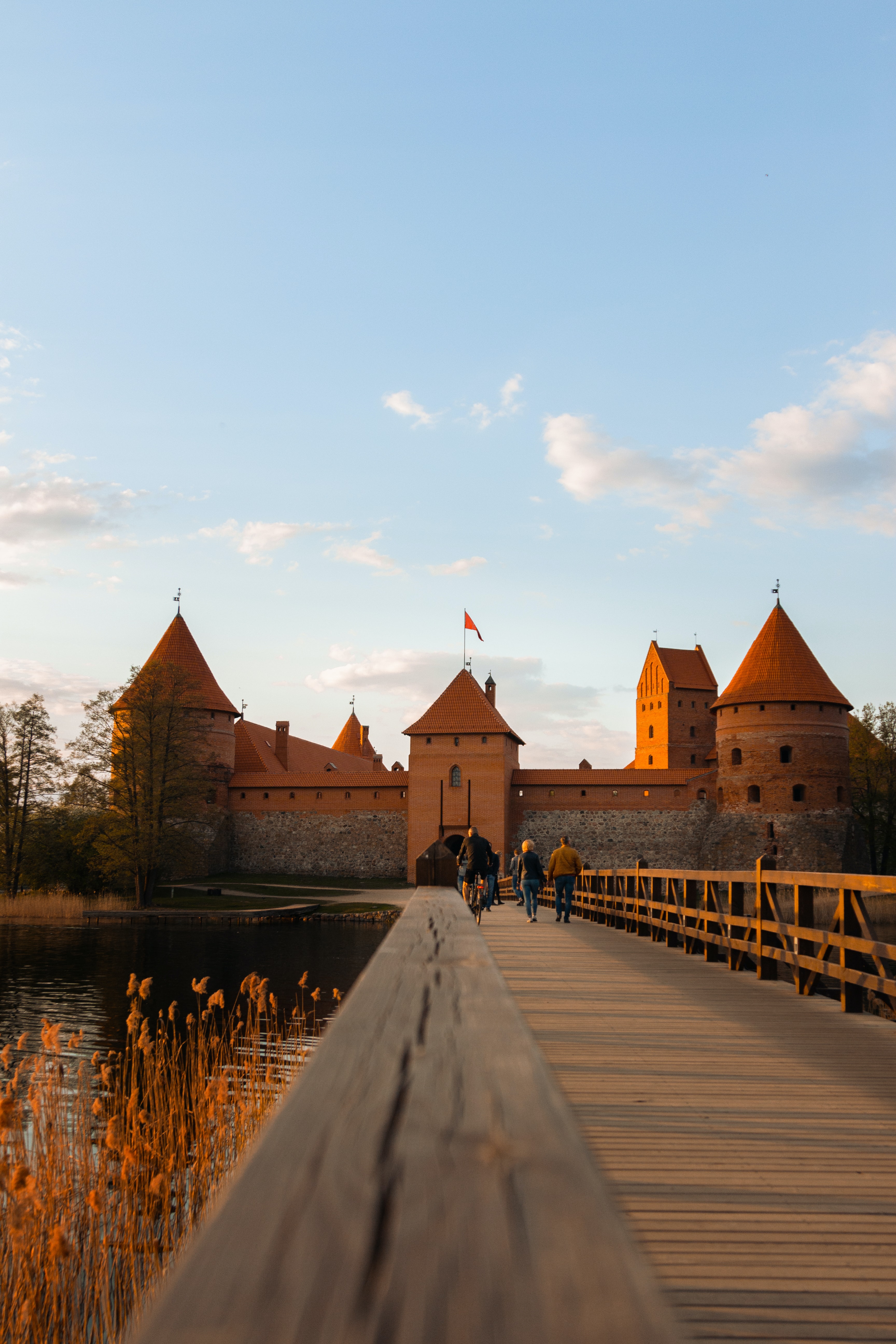 Trakai Island Castle is located on a tiny island near the south shore of Lake Galvé. The Gothic-style brick castle with its glazed orange roofs and stained glass, has defended the western approaches to Vilnius since 1409. The castle fell into disrepair in the 17th century, but has now been lovingly restored. Today, it serves as both a cultural landmark and a scenic weekend escape for residents of Vilnius.

Trek to Trakai Castle on our Baltics Adventure tour. 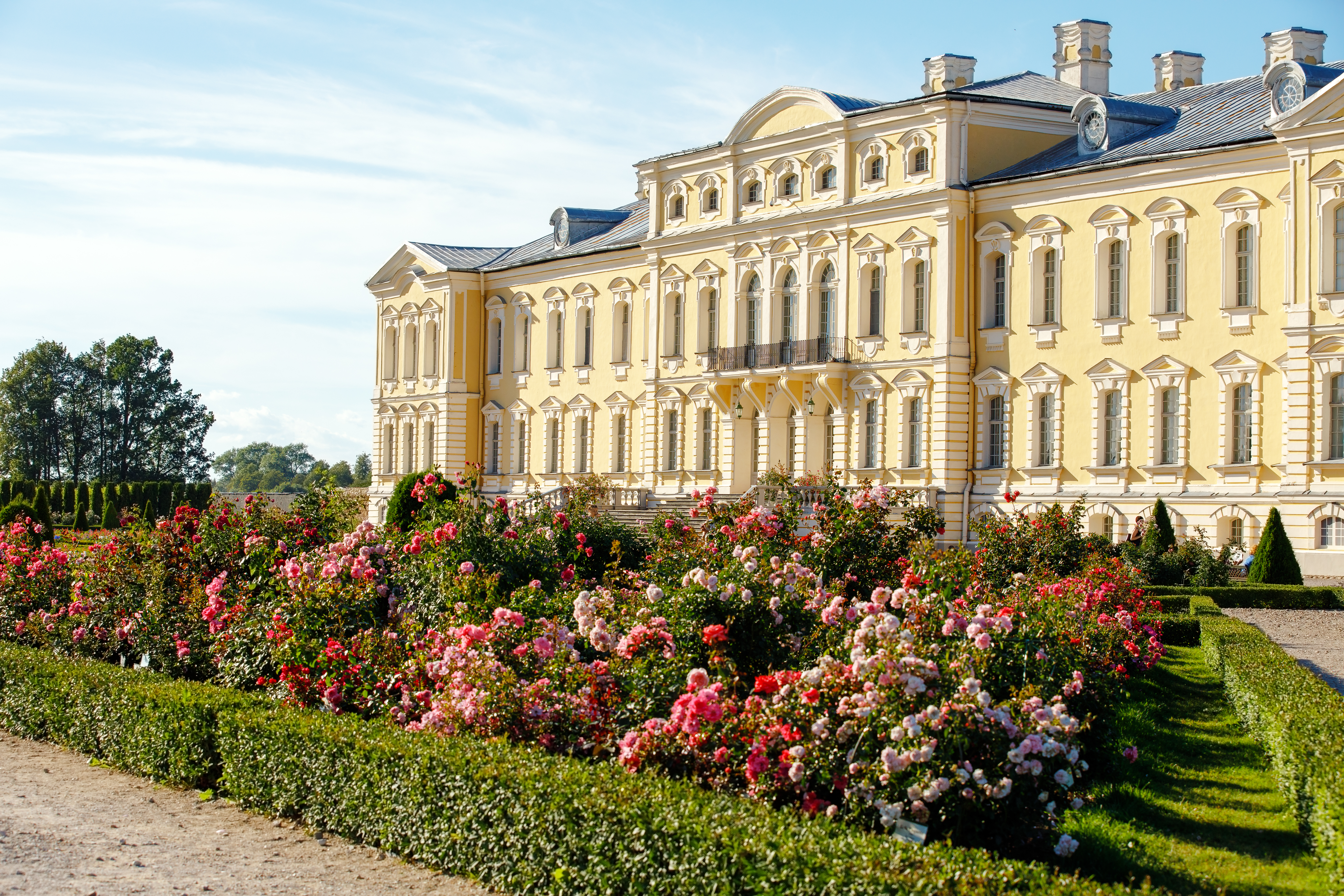 Rundale is the largest Baroque castle in the Baltics, and the former summer residence of the Duke of Courland. From its detailed throne room, to its vibrant sleeping chambers and elaborate gardens, it’s definitely worth a visit—especially if you like roses. It truly feels like you’ve traveled back in time as you walk through the walls that have been left untouched for ages.

Stop to smell the roses on the Rundale Palace on our Highlights of the Baltics tour). 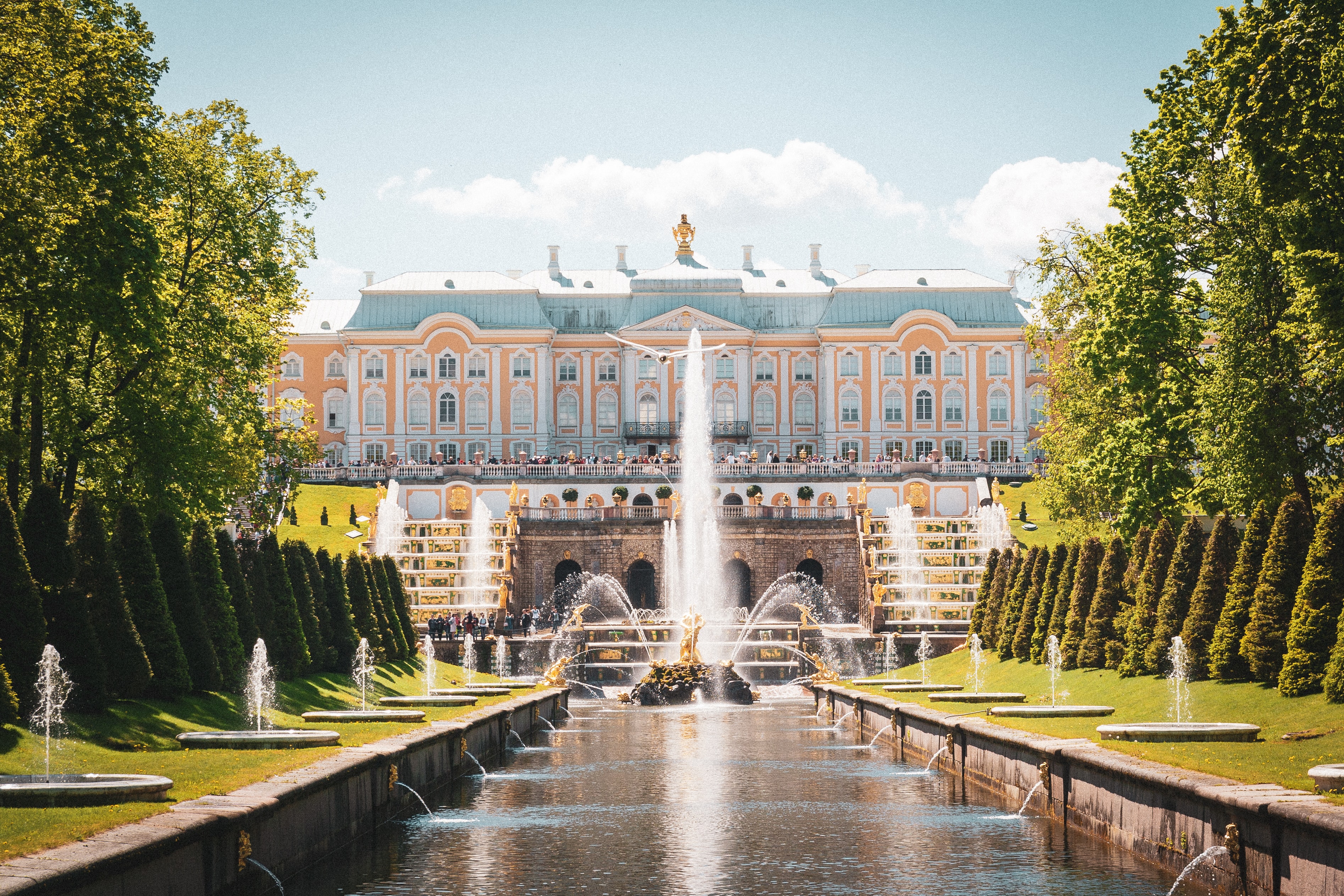 After Peter the Great transformed a frozen swamp into the city of St. Petersburg, he needed to build a palace commensurate with his ambitious new capital. Atop a 50-foot-high cliff, Peter began construction on Peterhof, the complex of palaces and gardens that would come to be known as the “Russian Versailles.” His successors added many of Peterhof’s iconic fountains, gardens, parks, and cascades, some of which survive to the present day. You can see it on our Highlights of the Baltics tour extension.

﻿Visit Peterhof on our Highlights of the Baltics tour extension.

Around the world Travel trends 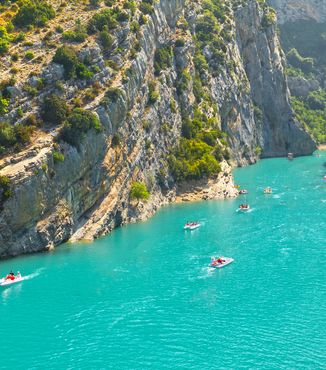 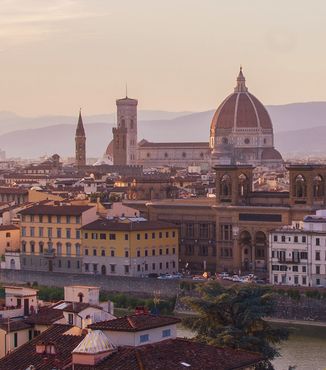 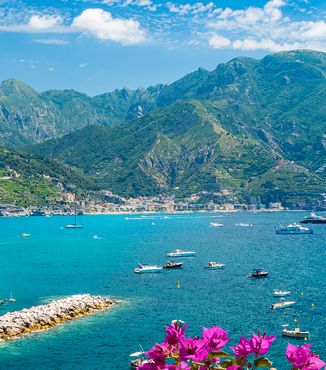 Travel tips
The best things to do, eat, and see in Southern Italy 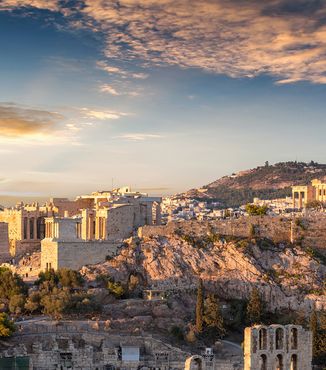